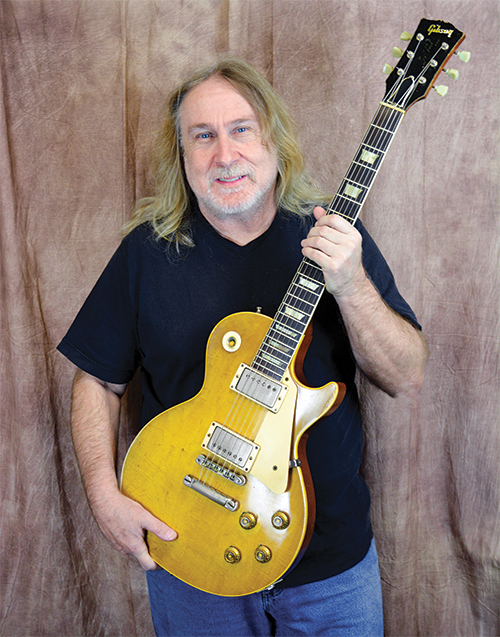 Albums by Kentucky Headhunters have a history of making guitar players shake their collective heads at the great sounds made by Greg Martin. The band’s latest, On Safari, is another collection of rock, country, soul, and other sounds that not only offer glorious tones, but songs that emit a sense of spontaneity.

“It pretty much made itself,” he said. “I honestly love going to the studio and playing as a reaction to whatever is going on around me. Just seeing what happens. I don’t like sitting there and picking things apart.”

Following the extended illness then passing of James Howard, father of Headhunters Fred and Richard Young, the album’s recording was a reunion, of sorts.

“We hadn’t been able to get together much,” Martin noted. “Then after their dad passed, Fred really wanted to get together to help us get through the grieving. There was a spirit in the studio that helped us along. It’s probably my favorite Headhunters studio album.”

Their approach was simple, which Martin appreciates in part because it creates a sound younger players try to emulate.

“I’m 63 and very comfortable being 63, so I’m honored anyone would think of me as a guy who has a style and sound that younger guitar players can appreciate. I don’t have a pedalboard. In fact, this may have been one of my simplest setups ever. I used my ’58 Les Paul Standard on all but one track and played everything through my ’50s tweed Deluxe  and ’60 tweed Champ chained together. It’s the first album where I haven’t used Marshalls, though I do use them on the road.”

Martin has become quite good at staying connected to fans. On Facebook, his “Licks From the Outhouse” posts are highly engaging and offer deeper glimpses of his command of tone and notes. They started as a joke – after all, why would anyone take seriously this guy who makes guitar videos in his pajamas and with a raging case of bedhead?

“I’ve done several at home, blowing through vintage Marshalls and Fenders, and I’ve done several from hotel rooms out on the road with The HeadHunters. Those are usually through a late-’50s Champ. Playing in a hotel is tricky; I usually stick the amp in the bathroom, for ambience, and use the door as a master Volume. The clips are just a fun way to share whatever I’m into that day, and demonstrate various guitars.”

Billy Gibbons has Martin send them via e-mail. “He seems to get a kick out of my sonic renderings and insanity,” Martin noted.

Other Martin clips can be seen on the Vintage Guitar Facebook page and at VintageGuitar.com. And, for the past 15 years, he has been hosting a weekly radio show on WDNS in Bowling Green, Kentucky. Broadcast (including via stream) on Monday evenings, it’s three hours of the music he grew up hearing, and interviews with some of the folks who played it.

The Headhunters are keeping busy, playing 60 to 70 dates each year. “We went to Sweden last year, and to the U.K for the first time,” Martin said. “It was a great experience. So, yeah, pretty busy for a bunch of older guys.”

When asked how he became the player he is today, Martin says the process just happened.

“I was never good at copying solos note for note, but got inspiration from lots of great players. Then, stealing a lick here and there helped me find my own sound. God gives each of us our own sound, it’s in our DNA and fingerprints. When people can recognize your playing by your tone, phrasing, and vibrato, you have arrived. It’s not about being the best, but being the best you can be, finding your sound, and passing it on.”