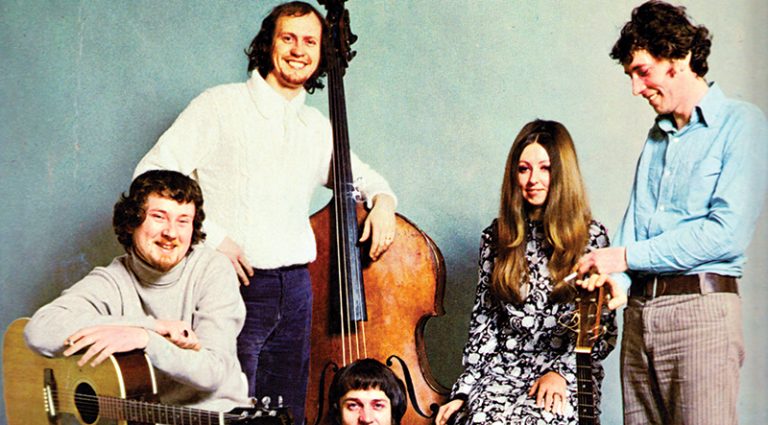 When one thinks of bands with two (or more) lead guitarists, groups like the Eagles, Buffalo Springfield, Quicksilver Messenger Service, Wishbone Ash, the edition of Fleetwood Mac featuring Peter Green and Danny Kirwan (and Jeremy Spencer on slide), and of course the Allman Brothers Band’s Dickie Betts and Duane Allman come to mind – not to mention Allman’s work with Eric Clapton on Derek and the Dominos’ lone studio album. But in folk circles, specifically British folk, one ensemble stands head and shoulders above all others: Pentangle.

The quintet featured bassist Danny Thompson, drummer Terry Cox, and singer Jacqui McShee, but it was the rare instance of arguably the two greatest guitarists of a genre collaborating in a working band. Steel-string fingerpickers John Renbourn and Bert Jansch followed in the footsteps of pioneer Davy Graham, but were far more prolific, separately and together.

To commemorate the 50th anniversary of the group’s formation, the six albums it released with its original lineup, between 1968 and ’72, are now available as a seven-disc (owing to studio/live double album Sweet Child) boxed set.

Labeled a folk-rock supergroup, the original 61 tracks amply illustrate the band’s fusion of traditional British folk with jazz improvisation, blues, and world music. But also included are 54 bonus tracks (outtakes, live shots, and songs from contemporaneous solo LPs by Jansch and Renbourn) – 22 of them previously unreleased, including a live “She Moved Through The Fair,” renamed “White Summer” by Jimmy Page during his Yardbirds stint.

Against all odds, and unthinkable in today’s pigeonholing climate, Pentangle was not only extremely influential in Britain (recording Charles Mingus’ “Goodbye Pork-Pie Hat” years before Jeff Beck); it was also commercially successful. Its self-titled debut nearly cracked the U.K. Top 20, and Basket Of Light (both were produced by Shel Talmy, of Kinks and Who fame) shot to #5. In fact, the latter’s “Light Flight” hovered just under the Top 40 singles, despite its shifting time signatures – 5/8 to 7/8 to 6/4.

The eclectic bent embraces the mysterious “Sally Go Round The Roses,” by ’60s “girl group” the Jaynettes, Muddy Waters’ “Louisiana Blues,” retitled “Way Behind The Sun,” an 18-minute excursion on the traditional “Jack Orion,” and “House Carpenter,” probably best known by Appalachia’s Clarence Ashley, featuring Jansch on clawhammer banjo and Renbourn on sitar.

Appropriately, the deluxe treatment includes an 88-page booklet with plenty of photographs, insightful essays about each album, and interviews with Jansch and Renbourn, who died in 2011 and 2016, respectively.