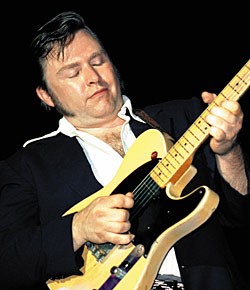 Ten years have passed since Danny Gatton killed himself at his rural Maryland home. The reasons remain shrouded in mystery, yet his legacy is more visible than ever.

Holly Gatton has no trouble believing her father’s dazzling chops and restless eclecticism left their mark. She receives regular correspondence reinforcing that fact.

“The farthest [e-mail] was from Germany – a guitar player is selling some of Dad’s CDs on his site,” Gatton said. “I go from Germany to getting one from someone in Blacksburg who had no idea I lived here, and hoped they’d run into me at the grocery store sometime!”

Holly and her mother, Jan, became custodians of Danny’s legacy after settling a lawsuit against NRG Records, the entity Norma Gatton created to release her son’s music.

The work is now coordinated by Flying Deuces Music, a company set up by Jan, Holly, and Big Mo Records, which is run by longtime engineer Ed Eastridge and his wife, Dixie.

The latest CD is Funhouse, taken from a June ’88 gig with Danny’s nine-piece jazz band of the same name. The gig reunited Danny with pedal steel guitarist Buddy Emmons, his late-’70s sparring partner in the Redneck Jazz Explosion. Fans can decide if Danny’s well-documented perfectionism warranted keeping the tapes on the shelf.

“Well, he was really hot at the time. I think he was woodshedding a lot, and it showed in his playing,” Eastridge said.

Eastridge produced the album, on which he did no editing except trimming the horn solos. He reasoned that fans, “…don’t want to wait seven minutes before they hear the first guitar licks,” he said.

The next project may be a reissue of the Redneck Jazz Explosion’s December 31, 1978 gig. Eastridge is reviewing bootlegs to see if he can improve the existing CD.

“We’re going to try to re-mix it, so it matches the bootleg, because the bootleg is really high quality,” he said.

Holly has heard little about the lawsuit that divided her family and Washington, D.C.’s musical community. She’s more concerned about seeing her father’s legacy properly presented.

“It’s not about making money; we’re not going to get rich doing this,” Gatton said.

But the Gattons may face yet another walk through the legal thicket. Guitarist Evan Johns is planning to contest the estate’s copyright on the 1978 album Redneck Jazz, on which he wrote three songs, including the title track.
Johns asserts Big Mo cannot sell the album, for which the musicians had no contracts and he claims to have seen no royalties. If a court supports him, Johns plans on releasing Redneck Jazz himself.

“It’s my property, and [the estate does] own one-fifth,” Johns said. “But I own more than one-fifth because I’m the publisher and songwriter, not a side man.”

On a brighter note, Johns plans on releasing Showdown At The Hoedown, from an ’80s gig at Baltimore’s 8×10 Club. It features himself and Danny tearing up more rock-oriented material.

“Somebody taped the right night, because I didn’t cut him no slack,” Johns said. “I was hunting for his head. But I always went first,” he added, laughing.

Drummer Dave Elliott also continues to field questions about his 18-year association with Gatton. He holds the rhythmic fort in several bands, including Bill Kirchen’s Too Much Fun.

Playing with another Telecaster exponent like Kirchen fuels the legend and keeps everyone on their toes, including himself, Elliott said.

“Any band I play in, I can really tune in,” Elliott said. “If I watch their body language, or stare at the backs of their heads, I can follow them. I learned it from the master, which was Danny.”

Elliott also joined guitarist Dave Chappell and bassist Billy Hancock in re-formed Fat Boys, the mid-’70s combo where Danny made his mark as a bandleader. The experience has taken Elliott back to his musical roots.

“When I first went out with him, he thought I was playing too much, but he’d say, “You’re laying down something underneath it,'” Elliott said. “I didn’t know any differently; the busier I played, the more attention I got.”

Guitarist Arlen Roth has reconnected with people who shaped Danny’s legacy, including keyboardist Bill Holloman and drummer Shannon Ford. Both are in Roth’s current band.

“[Previti] was working on an album in ’94 with Danny,” Roth said. “He sings a lot like Roy Orbison.”

Roth is also overseeing a reissue of his 1995 Toolin’ Around album, which features Danny on one track. The disc will also include a DVD of the sessions they did together.

A jam with Previti in Annapolis, Maryland, convinced Roth that his late friend’s legacy is in good hands, “Because the energy down there will just never stop,” he said. “You’re talking about Telecaster country, and the fans never cease to be fans.”

The experience convinced Roth to produce two albums for Hillbilly Jazz. The lineup includes Previti, plus guitarists Jim Stephanson and Chick Hall, who is, “Cut from a similar stone as Danny,” in Roth’s view.

“When I was playing with those guys, you could just feel Danny looming over the event. You could feel his presence.”

As far as Johns is concerned, the true extent of Danny’s legacy will become obvious to anyone who does their homework.

“If you have the right technique, your vocabulary is endless because you have the ability to do with it as you choose,” he said. “You have options, ya’ know?” 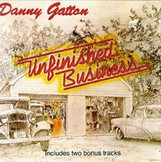 Powerhouse Records has reissued Danny Gatton’s Unfinished Business album. First released in 1987 for NRG Records, it was Gatton’s last studio album before signing with Elektra Records and boasts his typical eccelctic mix of roadhouse/honky tonk American roots music. The album has been remastered to enhance the sparkling guitar sounds that were the hallmark of Gatton’s guitar sound, and the package has new artwork and photos, as well as the original front cover art.


This article originally appeared in VG‘s Jan. ’05 issue. All copyrights are by the author and Vintage Guitar magazine. Unauthorized replication or use is strictly prohibited.