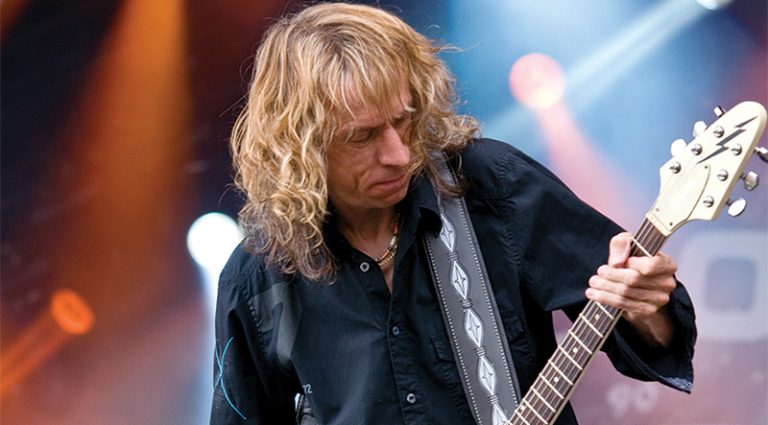 Though Diamond Head never achieved the same worldwide commercial success enjoyed by some of its fellow New Wave of British Heavy Metal compadres (namely Iron Maiden and Def Leppard), their influence on one of metal’s biggest bands is undeniable. Metallica has covered four of the band’s tunes, and while members have come and gone, guitarist Brian Tatler has remained a constant from the beginning – and is featured once more on the band’s first new album in eight years, Diamond Head.

The new album sounds reminiscent of the band’s early work.
I think it was kind of a conscious decision. It’s difficult to imagine yourself back in the old days, and try and write something like the first album, Lightning to the Nations, but it does seem to be the one people like the best. And of course, you’ve got the “Metallica connection” – the four songs they covered were all from our first album. So there is a bit of thought behind the new album, that it should sound like a Diamond Head album and not like we’re trying to sound like anybody else or trying to be modern. The way I write and the chords I use and the riffs I come up with… we had a discussion about it and thought that would be the way to go, to make that kind of record.

From a guitar standpoint, which are your favorite songs?
I like the opening track, “Bones.” It’s got great riffs and I thought that would be a good opener to the album. And then I think my second favorite track would be “All the Reasons You Live,” which is a slower track, and that’s detuned – that’s in C#. I think it grooves and the [Rasmus Bom Andersen] vocal is fantastic on there.

What do you recall about writing “Am I Evil?,” from Nations?
It started with the riff, as they so often do. So I had this big, heavy riff – which I suppose is a little bit like a Black Sabbath riff – and we decided to work on it. We would have been in my bedroom; we used to have a weekly rehearsal there, and we built it until it grew to be seven minutes and 40 seconds long. We’d stick a bit on the end and a bit on the intro, and the solo evolved over time. We got very good at working on arrangements, rather than it just be a simple verse/chorus, three-minute song.

We somehow got into the idea of making long, epic songs, that kept the listener’s interest for six or seven minutes. I find it very difficult to do now, but at the time, we were brimming with confidence, and you’re on this journey to see what’s possible, and anything goes.

What was your initial impression of Metallica’s cover?
I was flattered. I knew Lars [Ulrich] because he had come to see us. So to me, it was, “Lars’ band has covered ‘Am I Evil?’’’ They weren’t what they are today – the biggest metal band of all time. They were on a little label, Music for Nations. I hadn’t seen them yet; this was 1984, and it was a B-side to “Creeping Death.” When I listened to it, I thought, “They’ve gone through so much trouble to learn it and play it properly and work out the solo.” I thought it was more aggressive than our version. James [Hetfield] has got more of an aggressive style of singing than Sean.

What was your setup then?
In the early ’80s, I had the white Gibson Flying V, which is always my main guitar, and that would be going into a Morley Power Wah Boost and a Marshall – probably an early Master Volume JMP-1 from ’77. Lightning to the Nations is recorded with just that – it was all we had.

Do you give guitar lessons?
Yeah, I’ve been giving lessons for eight years. I do them from home, and a lot of times it’s young kids coming after school. You have to start with an E chord and build from there. Sometimes, it’s older guys, and they’re in a rut, and they want to get out of the rut. Sometimes they say they don’t know how to play all over the neck. It’s very interesting to see other people’s styles and to analyze your picking style and the way you hold your hand and fingers. It’s taught me quite a lot, teaching.