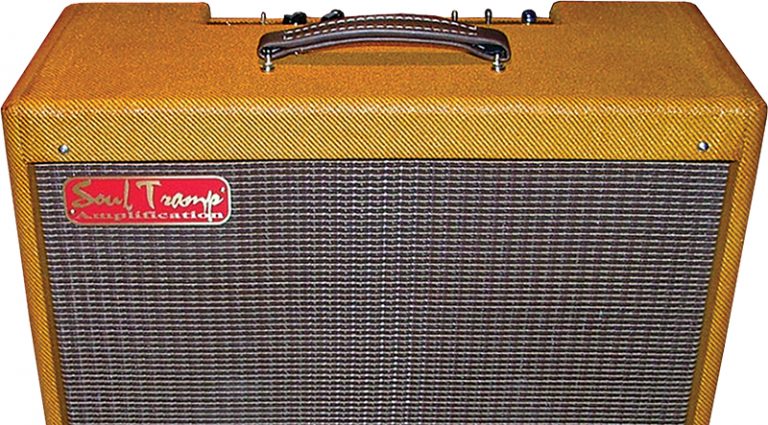 Soul Tramp Amps are builder Don Hill’s take on classic amp circuit designs… for instance, his Tweed 12 offers a spin on Fender’s Deluxe at the height of its form.

The Tweed 12’s cab is made with dovetail-jointed pine and has a hardwood-ply soundboard with a pair of 10″ Weber speakers (British Alnico and Ferromax Vintage, wired parallel) that combine to create nice, smooth low-end with a very clear overall projection.

Though fans of the tweed Deluxe will certainly appreciate the sound of the Tweed 12, this is no 5E3 clone. Rather, Hill’s proprietary circuit pushes the concept in new directions. The basic layout is comprehensive, with knobs for Volume, Tone, Soul, and Master volume, while the Boost and Bite switches extend its palette.

Through the clean channel (labeled Volume), highs were clear and articulated, lows strong and balanced. Engaging the Bite switch produced a hump in the upper mids that didn’t shadow or detract, but added significant gain (by engaging a cathode-bypass cap).

Pushing it further with the Boost switch – which engages a second gain stage – created natural breakup at higher volumes with slightly more clear harmonics with a smooth roll-off – classic characteristics of 6V6 tubes. Dialing the channel all the way up compressed the tone slightly. Experimenting with humbuckers and a Strat’s neck pickup, the amp had a warm crunch and hints of fuzz, but never got woolly. And with both, it offered striking touch-sensitivity and responsiveness.

The amp’s Soul switch is voiced to add grind and snarl; it splits signal to run through both “channels” and the shared tone stack. A little tweaking in the balance unlocked harmonics and sweet spots where notes really bloomed.

Like the Deluxe, the Tweed 12 is a cathode-biased amp, which means there’s no need to adjust bias when changing tubes. Hill experimented by swapping 6V6s for 6L6s and described the result as like going from an 18-watt to a 20-watt amp. While the Soul Tramp’s Mercury Magnetics transformers can handle such a swap, it is not recommended for vintage Fenders.

The Soul Tramp Tweed 12 is an impressive work of art in terms of build and sound. Hill has elevated the concept, and his construction and appearance are top-notch. This is what a boutique amp is supposed to smell, feel, and sound like.