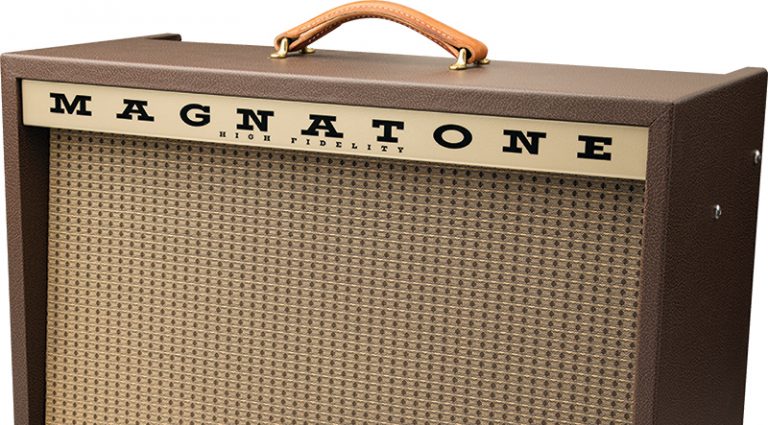 Magnatone amplifiers date back to the 1940s and ’50s – the era of Hawaiian-steel guitar – and boasted pearloid-covered casework befitting the silky, exotic post-war slide-vibrato sounds of the South Pacific. But they were truly set apart from the Fender-led pack with the introduction of their “true vibrato” circuitry (and proprietary “Varistor” control).

Unlike tremolo circuits, which electronically vary the signal’s amplitude (volume) to create rhythmic staccato, the vibrato preamp stack in late-’50s/early-’60s Magnatones played on the frequency (pitch) to emulate the pitch-bending effects of fingers on frets and slide bar over steel strings. The resulting tone is unlike any other amp – a clean, psychedelic warble that, when combined with reverb, has been known to induce fits of seasickness. By the late ’60s, Magnatone had faded into oblivion thanks to a series of failed acquisitions and a shift to solidstate circuitry. Those seeking the unique “Maggie” sound had to hunt gig-worn dinosaurs to refurbish.

It’s natural to be skeptical that the new Magnatone Panoramic Stereo could live up to the expectations created by the original 260s and 280s. Thankfully, though, the reincarnation brings back not only the late-’50s styling but, more importantly, a faithful reproduction of the circuitry. In fact, everything about the Panoramic Stereo is impressive.

Visually, it’s a more-compact but true rendition of the 1959 280 we used in our A/B test – right down to the brown tolex, contoured leather handle, gold grillecloth, and brass name plate. The slanted control panel on the back has Magnatone’s distinctive white chickenhead knobs as well as controls for vibrato speed and intensity. And, unlike original Maggies, the chassis doesn’t threaten to come sliding out in mid transport.

Sonically, the Panoramic Stereo is a dead ringer for the 280, but with nice additions. It’s loud, with plenty of headroom, but there’s also an underlying hint of grit that pairs well with single-coil guitars. And unlike the originals, the Panoramic Stereo has onboard spring reverb that negates the need to haul another pedal. The combo ships with 10″ ceramic speakers (similar to the Oxfords in the 280) and has a two-switch foot controller with LEDs to engage reverb and vibrato.

High-headroom amps should sound dead quiet, and the Panoramic certainly is. When cranked, there is plenty of volume. It was difficult to hear significant difference in tone between the new Panoramic and the ’59 280. That’s no mean accomplishment.

For snicks, we hooked up a modified Fender Deluxe (5E3) to the Panoramic and plugged in a replica of Neil Young’s Les Paul, “Old Black” (Young being one of the more-notable Magnatone devotees; his late-’50s 280s were fed a padded-down signal from the extension speaker jack of his Fender Deluxe and were integral to his about-to-explode sound). The complexity of tone generated with this combination defies description. All we could say was, “Wow!”