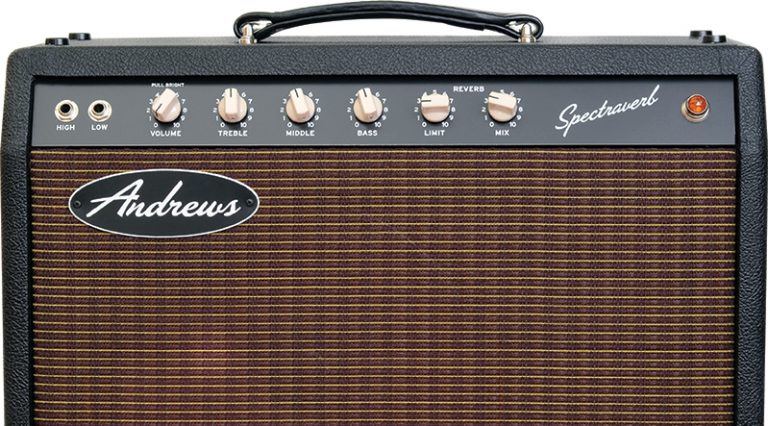 Run with a late-model Strat and late-model ES-335, the amp delivered an abundance of classic blackface tone, with chiming highs, smooth/slightly pulled-back mids, and a tight, rounded low-end. The tone controls are well-voiced and interact nicely with one another. It didn’t take much fiddling to dial in a very usable sound, and the Pull Bright control did a great job of adding sizzle to the 335’s humbuckers.

Ask the Spectraverb for more volume, and harmonics and overtones increasingly enter the mix, along with a light, bluesy overdrive. For more-serious crunch, an Ibanez TS9 meshed very well, producing a rich, saturated overdrive. The spring reverb also recalled a classic blackface tone – clean and wet with a slightly darker dwell that didn’t wash out the amp’s tone even when it was dialed in heavy.

The Spectraverb’s Reverb Limiter did just what Andrews claims it does, making the reverb much more pedal-friendly and allowing the player to drive the front end (and the reverb circuit) harder with an overdrive or boost pedal while not washing out or drenching the tone in reverb. We achieved a wet, lush, and clean sound with the Tube Screamer off and a wet (but not drenched) crunch tone with it on. The Limiter circuit did not squash the amp’s tone, but affected only the signal going to the reverb circuit.

Stylish and functional, the Andrews Spectraverb 16 is not just another blackface clone – it’s an updated, upgraded circuit with its own vibe and a more-refined sound that still offers that familiar 1960s “California” tone.