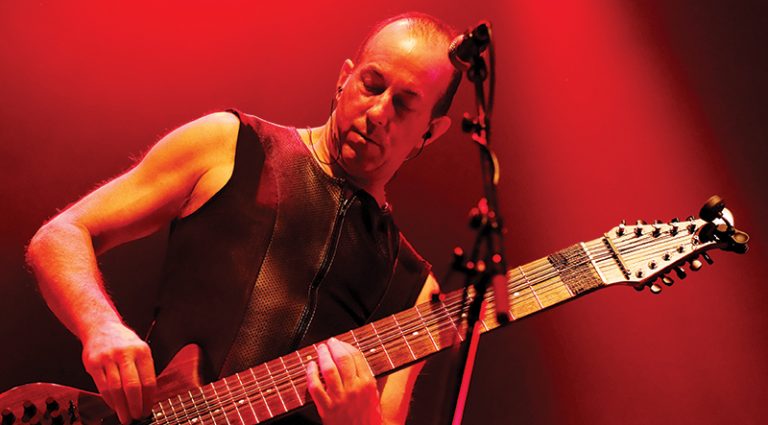 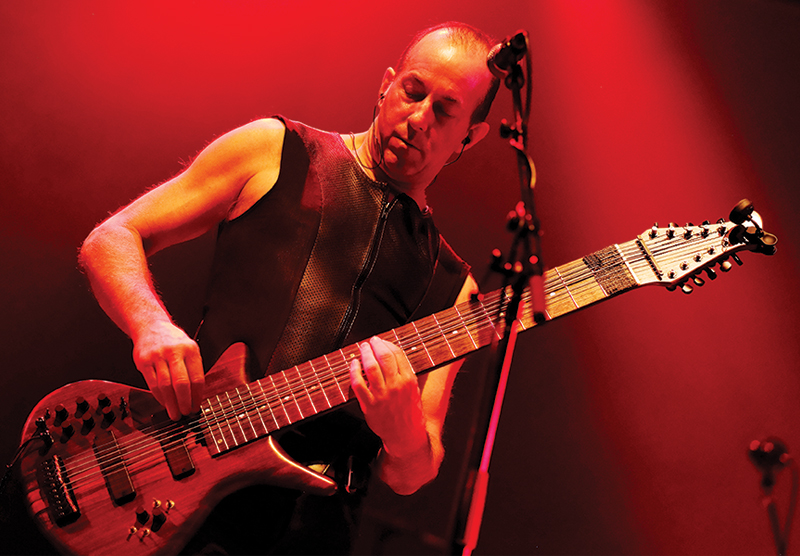 When profiled by Vintage Guitar in 1992, Trey Gunn was playing a Chapman Stick alongside guitarist Robert Fripp in a band called Sunday All Over the World.

Gunn’s two-handed tenacity soon landed him in a gig with a revitalized King Crimson that lasted until 2003, as well as numerous collaborations and solo projects. While remaining a “stick player,” the years since have seen him change brands and models; presently, he’s employing a signature model Warr, which differs from the Chapman in that it has a substantial wooden body.

“The Stick is a very streamlined version, while the Warr is kind of like a Maserati version of the idea,” he explained. Highly personalized, his signature Warr, “…has all regular things of a Warr Guitar, but with more mass in the body and souped-up preamps. The other change is that we put a sharper angle in the headstock and added a string tree behind the nut. Both had an enormous change to the low-end frequency spectrum across the whole instrument and give it a richer, warmer tone I prefer for tapped instruments.”

Gunn also detailed the tunings on his touch guitar.

One recent and unique group effort for Gunn has been The Security Project, which does interpretations of Peter Gabriel material. The band recently released Live 1.

“(Original Gabriel drummer) Jerry Marotta and I were approached by a mutual friend with the idea,” he recalled. “Initially we weren’t sure about it, but once we got together and played, it became obvious that this was something truly unique – a chance to dig deep into this very special music that rarely gets performed. This also gave us a chance to breathe our own life into it.”

Most of the selections on Live 1 are taken from Gabriel’s eponymous third album and his fourth album, unofficially named Security (from which the band takes its name).

“The Security record, while not as huge as the So record (Gabriel’s fifth solo album), was a defining recording, both for Peter and for all musicians at the time,” Gunn explained. “The song selection comes from the live show, of which this CD is only half. The other half will come out on Live 2+, in October. But the material comes from us wanting to take on Gabriel’s older and heavier material that he doesn’t play anymore.”

“‘Here Comes The Flood’ is a fairly different approach from the original, and from the number of live versions Peter made,” said Gunn. “He has always approached it from a piano perspective; I thought we should try a different angle and base it off of my touch guitar.”

“The mastering engineer, Chris Athens, said it was the best-sounding live recording he has ever worked on,” Gunn recounted. “I agree. The thing sounds fantastic because of all the pre-production and rehearsal work we’d done going into the performances.”

Asked which songs made it sonically obvious that he was utilizing a touch guitar, Gunn laughed. “That’s very hard to answer – to me, it’s all obviously touch guitar. But I guess I would say the introduction and first verses and chorus of ‘Here Comes The Flood,’ the intro and groove of ‘I Don’t Remember,’ and the solos in ‘(The) Family and The Fishing Net’ but the sound I use there is so incredibly unusual – a tritone on a pitch shifter – that probably no one knows what the heck the instrument is.”

While Live 1 was recorded in Europe, where such music is held in higher regard, Gunn noted that the band has been touring in the U.S., as well.

“We just finished our first West Coast tour,” he said. “In October, we will be in the Midwest and Northeast.”

The touch guitarist is also planning on continued work with other musicians and noted, “I will also start up a new solo recording this year sometime.”