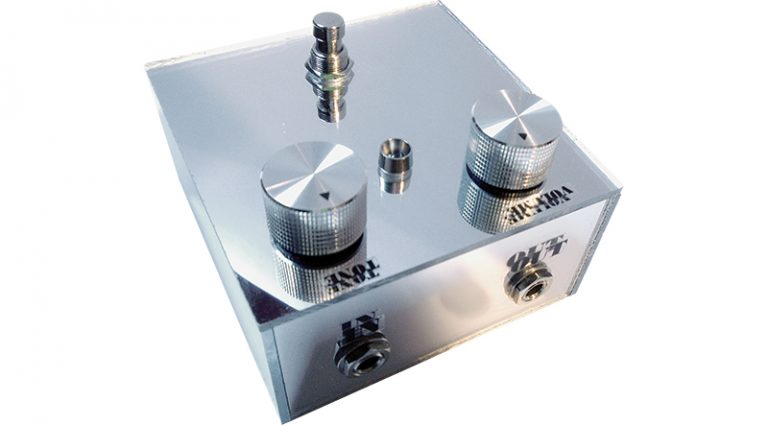 While honing his ears at Greene Street Recording Studio in New York, David Harrington was inspired to build studio-quality stompboxes. He must have done something right because as word spread, he amassed a fan base of high-profile guitarists with a predilection for righteous tones.

Fast forward a few years and Harrington’s Guitar Tone Company offers a line of four acclaimed pedals. One of those, the Bloody Finger, is a true-bypass tank of a distortion pedal, housed in a 4x4x2” mirrored Plexiglas aluminum enclosure. It takes a nine-volt adapter or batteries, and the layout couldn’t be more user-friendly: two big Volume and Tone knobs, an LED, and an on/off switch keeps things simple. The Bloody Finger’s user’s manual describes the Tone control as a subtle “Extended Sweet Spot” with a wide tonal range. It offers greater EQ options in the far left and far right positions.

Plugging into numerous combo amps and a few humbucker and single-coil guitars, the Bloody Finger turned every amp’s introverted clean sound into beautiful ornery truculence. Without a knob to modify the distortion, you’re confronted by a gritty, gain-fueled beast that is easily tempered by your guitar’s Volume knob. The Bloody Finger makes amps sound more expressive, and has a faint notched wah personality that will work in most heavy rock or blues-rock environments. Think Brian May’s tubey lead and rhythm sounds, or Michael Schenker’s classic notched leads – but with Billy Gibbons’ rasp and bite. The Tone knob is very subtle but will add warmth or complex punch to the top-end.

The Bloody Finger is a rugged facelift – the perfect tool to give your sound an entirely new character. Leave it on all the time, enlisting the help of your guitar’s volume control, or engage it just for solos to diversify your dirty arsenal.