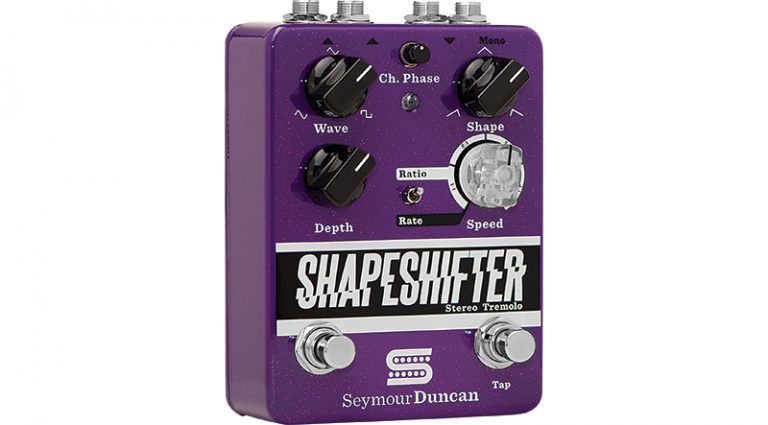 Tremolo is a simple effect: the amplitude, or volume, of an incoming signal is raised and lowered in pulsating waves. With the Seymour Duncan Shape Shifter, the player is invited to manipulate, modulate, or mangle those waves to emulate a variety of trems heard in vintage amps or to produce intense swells, chops, strobes, and robotic chatters that make any amp-based tremolo sound quaint by comparison.

The true-bypass, stereo tremolo Shape Shifter offers an analog signal path and a digital control, which is what cracks open all the possibilities. On the Wave knob, the tremolo is variable from a sine wave (smooth up/down) to a harder-sounding triangular wave (sharp up/down) to a square wave (abrupt on/off). The Shape knob is similar to an attack control, adjusting where the volume peaks along the wave. Set to the left, the volume has a long ramp, allowing swell- and reverse-like effects; at hard right, the same settings yield a pinging bounce.

Wave and Shape both interact sensitively with the Depth knob, which blends the dry and wet signals, and with the highly versatile Speed controls. One of the Shape Shifter’s best assets is the ability to tap in a tempo and then, using the Ratio control, subdivide the trem waves into 8th notes, triplets, or 16ths. Since you’re always in time, you can play with those divisions on the fly, too.

Stereo ins and outs mark the major difference from the previous iteration of this pedal, and not only for the left/right split – the Channel Phase mini-dial makes it possible to shift the two channels 180 degrees out of phase. With a stereo setup dialed out of phase, the trem effects seem to wrap the room and just about induce vertigo. The earlier version of this pedal offered the same controls in a vintage-friendly design, but it feels like Seymour Duncan has fully embraced the Shape Shifter’s digital brain – and all the wild weirdness it makes possible.