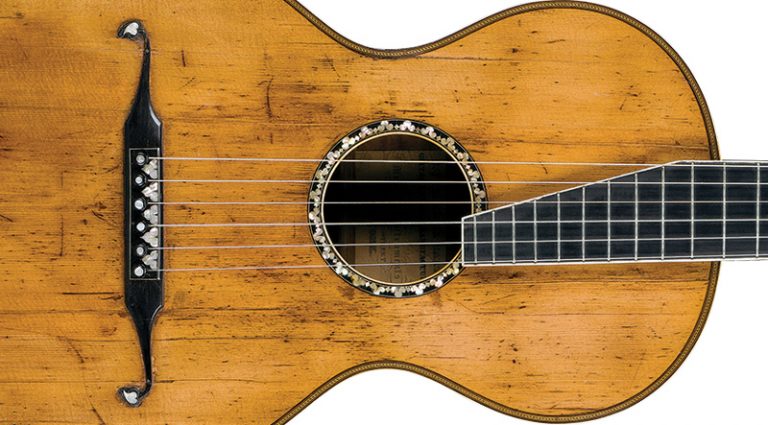 It has often been said that today’s Martin guitars are direct descendants of the instruments made in Vienna by Johan Georg Stauffer, whose apprentices included one C.F. Martin, Sr.

It is indeed true that about 25 percent of the earliest Martins labeled with the New York address (made after he moved from Germany in 1833) look virtually identical to Stauffer instruments, with a peghead having six tuners on a side, German-made gears, hourglass-shaped body with upper bout almost as wide as the lower, simple bracing without a fan or X pattern, three-piece necks with a cone-shaped heel grafted to the neck, and a grafted peghead with V-shaped joint.

According to Martin historian Greig Hutton, another 25 percent had tuners on both sides of the peghead and the remaining 50 percent had friction pegs. These early guitars were given paper labels as well as Martin’s burned-in logo, and their Stauffer-designed bridges were more elaborately shaped than Martin’s later rectangle. The use of bridge pins for attaching strings was also Viennese/German in origin.

In late 1837, influential Spanish-style New York guitarist/music teacher John Coupa became a customer of C.F. Martin, Sr. In March of 1840, that relationship became a business venture. At the time, high-quality guitars were not viewed as folk instruments, but were played by those aspiring to learn classical compositions such as those of Fernando Sor. Beginning in the late 1830s, a number of talented Spanish performers toured the United States and were influential in the New York guitar scene. One notable artist was Madame DeGoni; in 1843, Martin made a guitar for her with Spanish design concepts including the diamond-shaped volute and squared peghead seen today as typical Martin. It’s also the earliest datable Martin guitar with X-bracing – believed to be a C.F. Martin innovation. Spanish guitars had a peghead graft line which did not follow the contour of the volute, while Martin used the German-style V-shaped joint with the volute, rather than the Spanish technique, which was rather crude by comparison.

Martin also used a German-style dovetail joint for attaching the neck versus the Spanish heel design in which the neck block and neck itself were one piece, and sides which were inserted to the neck. He also adopted a Spanish-style body modeled after the guitars of Cadiz. The Spaniards tied the strings to the bridge rather than using pins, and Martin did likewise on a few guitars constructed between 1837 and 1840. These also used the fan-style top bracing. Hutton has proposed that Martin developed the X-bracing pattern by 1843 to open space near the bridge so drilling bridge pin holes would not damage the bracing. In any case, C.F. Martin soon returned to using bridge pins on all of his guitars.

What is notable is that in a period of five or six years, C.F. Martin experienced a creative burst during which the design of his instruments shifted from a Stauffer style to a design strongly influenced by Spaniards. Specifically, the squared peghead, heel shape, Cadiz body shape, and three-ring sound hole rosette and other ornamental features. Remarkably little remained of the Stauffer design – bridge pins, the graft for the peghead, and dovetail neck attachment.

But not all of the innovations on the 1843 guitar made for Madame DeGoni were copied. The DeGoni is quite different from the Spanish design and Martin’s workmanship was far neater than guitars made in Cadiz. However, the body shape, neck shape, and ornamental similarities are too much to be coincidence. Clearly, Martin had a radical turn in design concepts, and started producing guitars capable of putting forth far greater volume and dynamic range than his Stauffer-style instruments.

From the mid 1850s through the mid 1920s, Martin’s guitar designs evolved more slowly, the most notable difference being the gradual introduction of larger bodies. Martin customers continued to be primarily classical players, but the company was certainly swayed by musical trends – in the 1890s, the popularity of mandolins compelled Martin to produce bowlbacks, and its mandolin production during the early 20th century was as much, in some years more, than its guitar production.

The Hawaiian-music craze of the ’20s and early ’30s prompted the company to make ukuleles and steel-string Hawaiian-style guitars – ukes in greater quantities though the majority don’t have serial numbers, so it’s difficult to quantify. And, because ukes are small and fragile, relatively few survived, but they were an important source of income at the time.

Another creative burst in the late ’20s saw Martin introduce steel-string guitars with 14-fret necks, belly bridges, pickguards, and T-style frets (rather than the bar frets).

By late ’34, Martin guitars looked essentially the same as today, being direct descendants of those designed by C.F. Martin in the 1840s (the Spanish designs he copied were pre-Torres, of Cadiz).

Many years later, another great German maker, Hermann Hauser ,Sr., was strongly influenced by Spanish designs. Hauser had been making fine Stauffer-style guitars, but there was no great demand for them. In 1924, Hauser met classical guitarist Andre Segovia and built a copy of Segovia’s Ramirez. Unsatisfied with Hauser’s initial efforts, over the next decade, Segovia received increasingly better instruments based on that design until 1937, when he accepted the Hauser that he would use the rest of his life and describe as “the greatest guitar of our epoch.”

This success caused Hauser’s reputation to soar, and today, Spanish-design Hausers bring more than $100,000, whereas his Stauffer-design guitars, though they feature very fine workmanship, will typically sell for well under $10,000.

One crucial element in the history of the modern acoustic guitar hinges on how Martin and Hauser achieved the reputations they enjoy today only after each abandoned Stauffer designs.