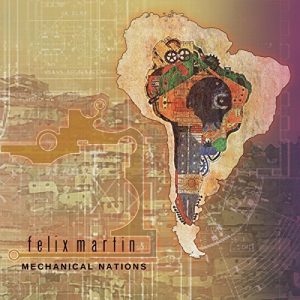 His new outing continues the trajectory of his past work with sounds firmly planted in the style of contemporary prog. With human interaction from Kilian Duarte on bass and Victor A. Carracedo on drums, this self-produced prog-fest will enthrall those seeking modern instrumental music. Continuing to share a stylistic kinship with the early work of the band Animals As Leaders, deeper listening yields distinction.

“Flashback,” “Carnatt,” and “Eight Moon Headdress” begin the set with powerful tapping and intense propulsive band interaction. By “Cardboard Roofs,” Martin displays the full range of his songwriting with dreamy arpeggiation and wistful melodies. Odd time signatures that turn on a dime, dreamy songs like “King Zartman,” and a bone fide rock guitar solo by Angel Vivaldi on “Santos” makes for enjoyable listening.