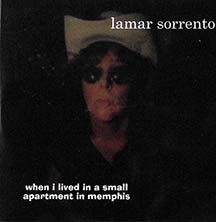 As the title of his latest might just hint, Lamar Sorrento isn’t expecting to break into the big time or sweep the Grammys with this disc. That’s OK, because it’s all too good for mainstream.

Sorrento is a Memphis-based folk artist, guitarist, and songwriter with a healthy history of self-released albums. And this collection is firmly rooted in the region: stomping Memphis R&B, deep Mississippi blues, Tennessee-flavored country, and good old rock and roll straight from its birthplace. So it should come as no surprise that this album was cut at Sun and Ardent Studios as well as Easley Recording, all in River City.

The album kicks off in high gear with “Down This Road Again,” catchy Beatlesque rock complete with sitar. “The Universe Sent Me An Angel” and “Sausalito Girl” channel Big Star in all its lovely power-pop glory. “Hideaway” is of course the Freddy King instrumental, but by way of the Hideaway Lounge down the road in Millington, Tennessee, honored in song by Johnny Burnette and the Rock ’N Roll Trio.

Sorrento writes songs and picks his guitar with a sly sense of idiosyncratic humor. No glitz, no glitter, no Grammy-in-the-future – just great music, the way rock and roll should be.

Ricky Skaggs with Kentucky Thunder – History of the Future