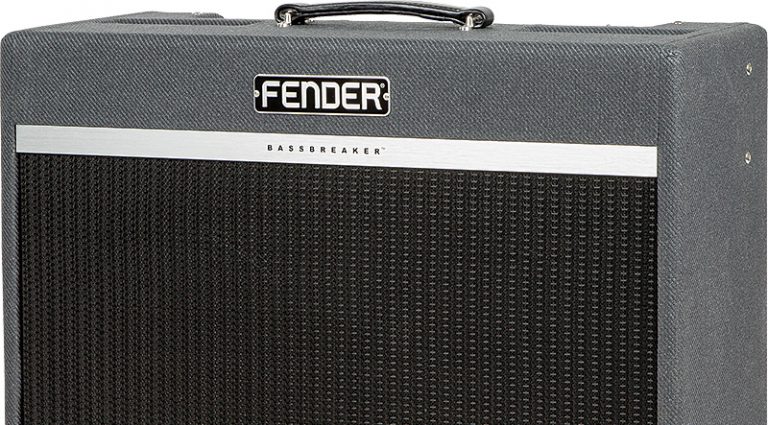 Fender’s new nine-product Bassbreaker series combines popular traditional amplifiers with modern technology. Classic tones and flexibility are the name of the game, which means a plethora of wattages and sizes providing the kinds of tonal succulence guitarists have come to know and love.

The Bassbreaker 45 Combo is the series flagship, and it has a lineage that dates back to the ’59 tweed Bassman. It’s a beloved circuit found on many great recordings, and it has been emulated by plenty of competitors. Not satisfied with merely replicating the past, however, Fender takes the Bassbreaker 45 in a different direction.

Instead of using 6L6 tubes, the Class AB powered Bassbreaker comes with two EL34s, along with three 12AX7s that yield a taste of British charm. It also comes equipped with two Celestion G12V-70 speakers for even more across-the-pond parlance.

The most prominent feature of the Bassbreaker, however, is an Output knob that allows you to scale back the power section from 45 watts all the way down to 1 watt, and everything in between, thus allowing adjustment for any performance environment.

With its gray tweed, black grill, aluminum trim, and birch-ply construction, the Bassbreaker is handsome and rugged, built for gigging. It also comes with a protective covering. Although it weighs a hefty 55 pounds, the Bassbreaker 45 packs a wallop in the functionality department by offering Normal, Bright, and Both inputs for loads of tonal options. Normal and Bright have their own individual Volume controls, while the Treble, Bass, Middle, and Presence knobs bookend the Output control. The rear of the amp has Main Speaker and Extension Speaker inputs and an Impedance Select. It features a semi-closed back cabinet with a rear see-through metal grille.

The ability to blend Normal and Bright input channels is key for dialing in the amp. The adjustment of the Output knob in concert with the Volume controls offers an abundance of rock and roll shenanigans. The Bassbreaker is voiced to produce the best characteristics of older American and British amplifiers. Think of it as the hybrid love child of a tweed Bassman and a Marshall Bluesbreaker.

Using Stratocasters and humbucker-style guitars, the user may finesse smoky grit or jazz-free cleanliness, while the Bassbreaker’s scalable power section allows the kind of low-volume crunch that won’t have the neighbors calling the SWAT team. While you’ll first be compelled to plug into the Both input, it’s important to suss out the Normal and Bright inputs to gauge how much Normal low-end girth to mix with Bright top-end dirt. The independent Volume controls work in tandem to sculpt interesting preamp combinations when you’re plugged into the Both input, which replaces the old-school jumper cables used to combine the Normal and Bright channels.

Onstage the Bassbreaker 45 Combo offers a loud, utilitarian sound that conveys an approximation of old-school authenticity. It’s a “set it and forget it” rock and roll machine that will provide a solid base tone for your effects pedals, with plenty of clean headroom.

Despite being fresh from the factory, the Bassbreaker 45 delivers smooth lustrous warmth. Good luck fooling vintage amplifier aficionados, though. Unfortunately there’s no control knob to create “aged to perfection” maturity, depth, and complexity. You get what you pay for, and the Fender Bassbreaker 45 Combo’s tone is commensurate with its price, offering the budget-conscious guitarist myriad rocking tones to fit just about any stage or recording environment.