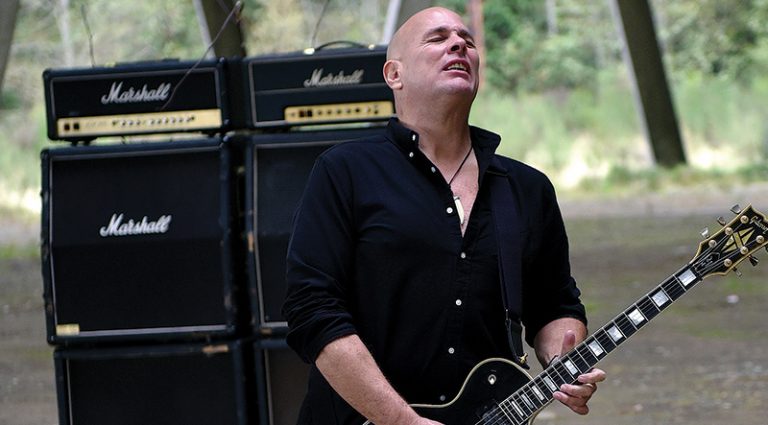 When it comes to thrash metal, the “Big 4” – Metallica, Slayer, Megadeth, and Anthrax – get credit for popularizing the style. But there were other trailblazing bands at the dawn of thrash, including Metal Church. The band recently issued its 11th album, XI, which included a reunion with singer Mike Howe. We recently spoke with founder/guitarist/songwriter Kurdt Vanderhoof.

How is XI similar or different to previous Metal Church albums?
It’s different in the fact that the obvious thing is having Mike come back to the band, which has been a wonderful thing. And the thing about it, for me, from a songwriting and musical standpoint, is having him back meant that instead of chasing the thrashy beginnings of the band – the first couple of albums during “the Mike Howe era” – it was heavy, but more melodic. The fact we could be more musical on the record was a really nice thing and a very inspiring aspect.

Which track is the most reminiscent of vintage Metal Church?
“Sky Falls In” was very heavy and dissonant and slow, and very reminiscent of “Beyond the Black” and the early stuff.

Not many know that you have a punk-rock background.
The punk movement hit me at the perfect time – the late ’70s – because all my favorite bands from the early ’70s were selling out. When Emerson, Lake & Palmer put out Love Beach, I knew it was over. Then suddenly, I found the first Ramones record and I was like, “Oooh. What’s going on here?” Even though I loved the whole prog thing and hard rock of the early ’70s, suddenly, this whole new energy came in. I heard Never Mind the Bollocks, and I was like, “Okay, I’m in.” Suddenly, it had that impact, that snarl, and the teeth that rock and roll started lacking in the late ’70s. But I never stopped listening to Rush and UFO. Then, I came across a band in Seattle called the Lewd. I saw them open for the Ramones and was blown away. I told the singer, Satz, “If you ever need a guitar player, let me know.” He called me, I got in, I quit high school, moved to Seattle, joined a punk-rock band, and made a record. Then we relocated to San Francisco, and I sensed a dead-end for the punk thing; I started hearing about Motörhead and Iron Maiden. It had the punk attitude, aggression, power, and the volume I loved as a kid, but yet had more musical skill involved. That’s when I went, “Okay… There we go.”

What do you recall about writing “Watch the Children Pray,” and the solo?
I don’t know if it was anything special, it was almost the obligatory heavy-metal ballad. But we didn’t know at the time it was that. We wanted to be more musical at that point. The original version had a different arrangement, but our producer [Mark Dodson] did it as a traditional arrangement. And the guitar solo… I’m not much of a lead guitar player. I can, but I never tend to do the shred thing. I always like to play very melodically and musically. Some of my favorite guitar players were David Gilmour and Leslie West, where it’s not about how many notes you can play, it’s about if you can play the right ones, and play a melodic part. And that’s why we have another guitar player, because he’s really good for the ripping/shredding stuff. For me, if I have one signature at all in lead guitar, it’s to play it very tastefully and melodically, rather than worrying about playing a whole bunch of notes. I’m a rhythm guitar player, and that’s what I like doing.

Metallica’s first live performance after Cliff Burton’s death was opening for Metal Church.
Metallica opened for us – two shows. We played the Country Club, and word got out that it was Metallica opening for us. Metallica was skyrocketing at that point, and after the whole Cliff thing, they opened for us. I remember going, “Boy, we better play for everything it’s worth now.” And we did, and it worked out just great. But that was a tough one to follow.