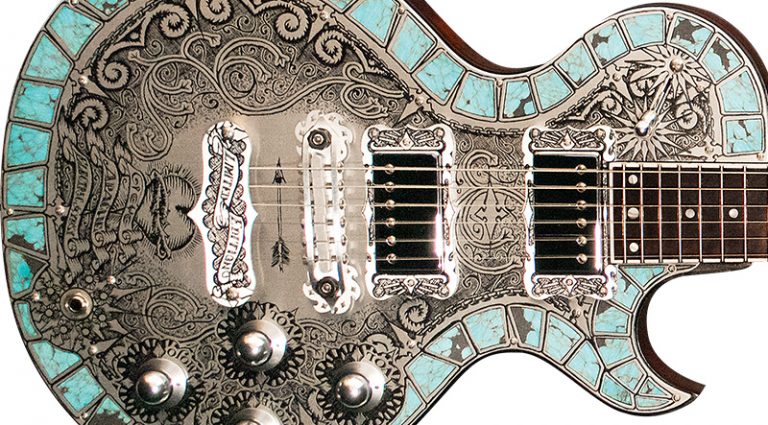 One of three stunning L-series models (along with its brothers, the El Toro and Cleopatra) introduced by guitar builder Teye, the single-cutout/mahogany-body Apache has a maple cap that echoes a Les Paul, and most guitarists will instantly recognize the influence of Tony Zemaitis in its etched-aluminum plates and inlaid faux turquoise.

Workmanship on the Apache is impeccable, as one would expect from such a hand-built instrument. Rather than attempting to stain the mahogany a uniform color, Teye celebrates the interplay between the lighter colored sap wood and the brown on the body and neck, which is reminiscent of desert Southwest sandstone under its hand-rubbed oil finish. Meanwhile, the faux turquoise inlays and the intricate acid- and laser-etched aluminum plates on the top, back control panel, and truss-rod cover evoke the silver Native American jewelry associated with Southwest tribes. Even the bridge-adjustment nuts, pickup rings, and tailpiece are engraved and shaped to complement the theme. As if a concession to non-custom hardware the Apache sports highly functional Grover Super Rotomatic Imperial tuners.

The Apache’s bound ebony fingerboard inlays are understated – a good style decision that keeps the Teye from verging on the gaudy. The neck is 1.75″ wide at the nut, scale is 25.5″, and fingerboard radius compounds from 10″ to 16″; it all makes for a very playable guitar with no fret-outs while bending.

Alright, so it looks good, but how does the Apache play?

This is one of those rare electric guitars that sounds resonant even when unplugged, due in part to the chambered construction that keeps the guitar nice and light. The Apache’s custom-wound Jason Lollar humbuckers work beautifully with this construction. The pickup switch sits about where a Les Paul player would expect, but it was nice find it a five-way toggle.

Plugged in, the Apache loved high-gain amps, offering a lot of clarity and bite with the Volume and Tone knobs dialed up, and a nice twang at less than full volume. Teye’s “Mojo” knob further shapes the tone, adding sweetness to overdriven amps. It’s a subtle effect, but a nice alternative to conventional tone pots. And, Teye’s laser etching – which makes the L series much more affordable than similar guitars engraved by hand – makes for a unique instrument with looks equal to its high grade of playability.