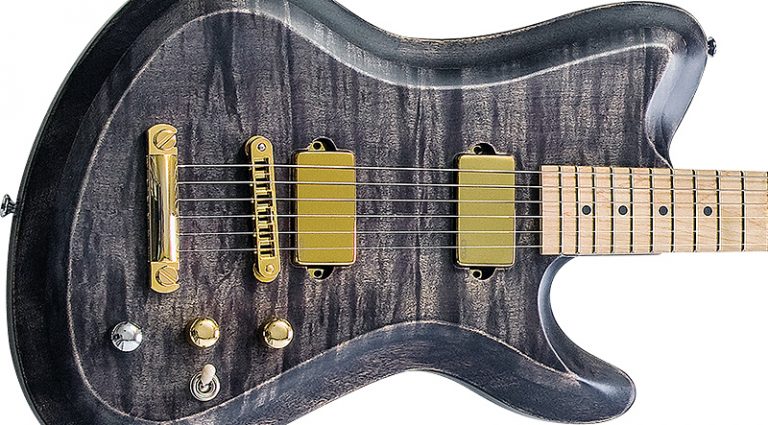 In a marketplace crowded with indie guitar builders, Killer B differentiates its Standard model with uncommon contours and a customizable feature set. The Standard reviewed was loaded up with sophisticated electronics and mixed metal hardware. It was also an eye-catcher with its dark, quilted top.

Vaguely sharing the outline of a Fender Mustang, the Killer B has an incongruous look yet is nicely balanced for playing while seated or standing. The body is slender and appears even narrower, given its contoured top; luthier Kevin Butts blends the quilted maple top to the three-piece Honduran mahogany body with a hand-cut taper that runs almost 1.5″ wide all around the face of the guitar, leaving the impression of an arched top. The quilted grain on the test model was nicely accentuated by a satin black finish that had the appearance of being naturally worn through like a good pair of jeans. The guitar feels light and features a generous belly cut in the back.

The Killer B Standard’s maple neck is attached with four bolts recessed into the back and is a comfortable modern C shape with a 12-degree radius and measuring 111/16″ at the nut. The fingerboard wood extends half an inch behind the nut, which is unusual, then ramps down to meet the truss cover on the headstock. At the other end, notes can be reached all the way up the 22-fret neck, albeit with a slight angling of the hand for the highest positions.

Second to the body’s curves and contours, the test guitar’s most striking visual was the mix of gold and chrome hardware against the black finish. If you weren’t already studying the Killer B to figure out what was unorthodox about it, the hardware mix warrants a double take. The Sperzel locking tuners (love those), three on a side, have the appearance of brushed white gold, while their string posts are straight-up gold. The pickup covers, Kluson tune-o-matic-style bridge, and Kluson stop tailpiece are gold, as are the Volume and Tone knobs, but the strap pins, pickup selector, and third knob (more on that in a second) are chrome. Even the output jack mixes gold and chrome. The tailpiece sits deeply in the lower bout, close to the bottom edge as on a Jaguar.

The EMG pickups selected for this model are active humbuckers. In the neck position an EMG 58 is voiced similarly to a P-90 for a full overdrive on rhythms and leads or a clean sound with some body. There’s no mistaking you’re in bridge position when you throw it to the treble pickup, an EMG 60 in the vein of a mini-humbucker with hot mids and a bright edge. In the Killer B these active EMGs generally perform best when they’re pushing an amp or pedal pretty hard, though they clean up nicely with a more natural sound when pulled back, especially in middle position.

Active pickups are valued for boosting and cutting gain, but the real secret weapon on this Killer B is that third knob behind the Volume and Tone – a midrange boost offering dynamic control over the active pickups. EMG calls this the Strat Presence Control (SPC), and it provides the ability to increase mid-frequency fullness and volume while attenuating highs. Rather than stomping on a pedal or switching amp channels, a player can dial up drive and volume intermittently, directly from the guitar, without an abrupt change in EQ. The SPC was originally designed to give cajones to single-coil setups, but in this dual-humbucker scenario it’s the key to controlling thickness and drive.

Electronics on the Killer B, including the three-way toggle, otherwise appear fairly standard and familiar – until you glance at the rear cavity cover and find a USB input. But technophobes can shelve their fears. Active pickups require battery power, and this mini-USB jack recharges a Fishman lithium-ion pack mounted to the underside of the cavity cover. You’ll never again have to make a last-minute run to the convenience store for 9-volt batteries. Fishman says a three-hour charge of the battery yields approximately 150 hours of operation.

A blinking red light indicates about five hours of battery life remaining to power the active EMGs and enjoy plenty more flights of the Killer B.