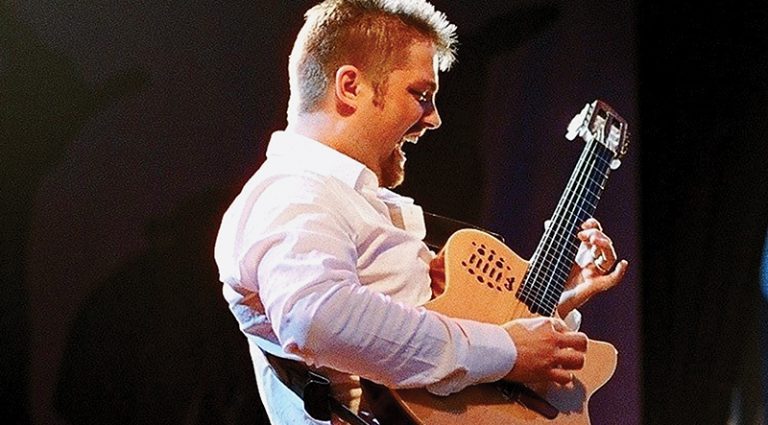 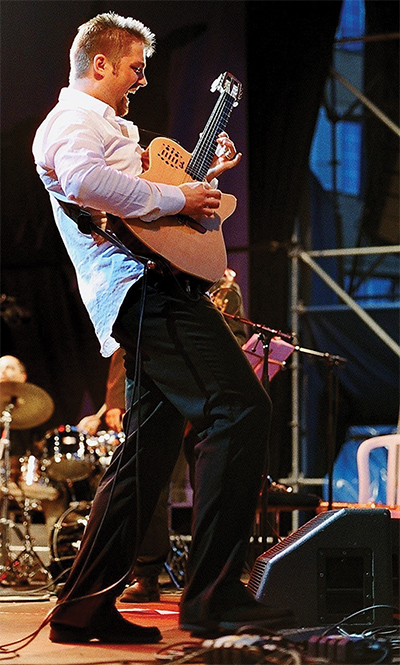 If you’ve been to a Jeff Beck concert in the past few years, you may have said to yourself, “Who’s that other guy onstage?”

It happens to be Nicolas Meier, a Swiss virtuoso who for more than a decade has also led his own groups, such as the world-metal group Seven7. A monster picker, Meier blends heavy rock and fusion with jazz, Latin, Turkish, Balkanic, and flamenco styles. His new self-titled solo album features Jimmy Haslip and Vinnie Colaiuta, legendary sidemen in their own right, and is full of barnburning musicianship. We talked to the fretboard wizard from his home base in London.

How did you land the Jeff Beck gig?
I was playing at Ronnie Scott’s Jazz Club, and Jeff came to see a friend who was playing with me. He seemed to enjoy my playing; after that, we jammed, and I got the gig. Onstage, I play 12-string guitar, classical, and electric guitar with three outputs – regular electric, piezo acoustic, and a MIDI 13-pin jack for guitar synth. Jeff also lets me take a few solos, like on “Blue Wind,” which is great fun.

You have some serious picking chops – fans probably compare you to Al Di Meola frequently.
Yes, I was a big fan of Di Meola when I was younger and listened carefully to his picking and overall playing techniques. I’m also inspired by Pat Metheny, George Benson, John McLaughlin, Scott Henderson, Allan Holdsworth, and rock players like Steve Vai, Joe Satriani, and Marty Friedman. From the acoustic world, players like Paco de Lucia, Tomatito, Erkan Ogur, Django Reinhardt, Andres Segovia, and John Williams were very important in shaping my style.

You combine flamenco speed with jazz-based phrasing, and there are also Middle Eastern tonalities in there.
Yes, I was already into jazz, metal, and a bit of flamenco when I got into Turkish and Balkanic music, and discovered quarter tones (Ed. Note – the various intervals between Western half notes). I realized I could find many more scales and sounds using quarter tones and, more importantly, play any note over any chord. It’s sort of like adding spices to food. How one uses quarter tones in an improvisation depends how much flavor your want, or how spicy you like it.

How does Turkish music differ from other types of Middle Eastern music?
By definition, Middle Eastern music is the music from Morocco to Iran, but every country differs from the next, because of some instruments and tradition. What was always interesting for me in Turkish music is the emphasis on melody and rhythmic patterns instead of harmony. It was always interesting that a song can stay in one key center, but by using different scales and makams (the modes and structures in Turkish classical music), you can create such a large variety of atmospheres inside it.

You play a nylon-string Godin acoustic/electric, as well as their 11-string fretless Glissentar. Tell us what attracts you to them.
As soon as I had my first Godin at age 20, I knew those guitars were perfect for me – in fact, now I endorse them. Also with my interest in Turkish music, I got into stringed instruments like the saz and the oud, so the Glissentar is basically an extension of those stringed instruments. I already was into the fretless guitar as I was looking for the quarter tones, but the Godins really have a sound of their own and work great with my setup of stereo effects and AER amps. For effects, I use a volume pedal, stereo delays, chorus, and reverb, but I avoid compression because I love having extreme dynamics.

You also play in the full-on metal band, Seven7. They too have a hybrid Turkish/Mideast/classical sonic approach.
In Seven7, I try to incorporate various influences, as I love the sound of putting world music in metal. So, in addition to loud, crunchy guitar, we have some saz, oud, and violin, which gives an extra boost to the world-music sound.

You use a lot of dark minor chords with 9ths and other extensions. How did you learn to expand your chord knowledge.
My interest in extended chord harmony came by listening to various styles and composers, but not only the guitarists I mentioned earlier. I love listening to Chick Corea, Herbie Hancock, [the late sax player] Michael Brecker, and bassist Renaud Garcia – all helped me learn these extended notes. Again, these additional chord notes are like using spices to flavor and improve one’s cooking.