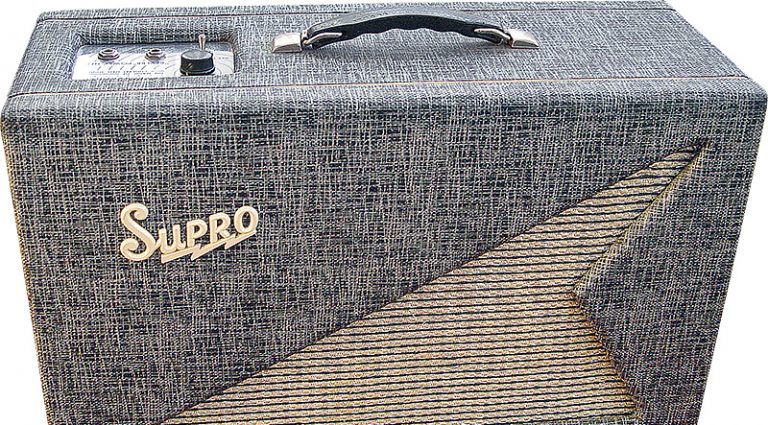 In the early days of reverb, no one was thinking about surf music; they were striving instead to replicate the warm, resonant, live sound of a concert hall. So, when Supro launched its two reverb-unit models in 1961, not only did the company’s catalog promise “The Magic of Concert Hall Sound,” the pledge was prominent on the control panels.

Supro and Fender were pioneers of guitar reverb. Who came first? Hard to say. Both launched reverb units in ’61, though Fender’s didn’t become widely available until ’62.

Fender’s was, without doubt, the greater success, becoming the gold standard for reverb. But with its arrow-shaped grille cutout, Supro’s Model 600R DeLuxe Reverberation Unit had the style, becoming one of the coolest, most sought-after, and valuable guitar effects of all time.

Supro and Fender borrowed the technology from the same source, licensing the newly developed Type 4 reverb from organ maker Hammond. From there, however, the two went in different directions with their designs.

In earlier days, the first reverb sound came naturally from the natural echo created by physical space. In 1957, the German company Elektromesstecknik released its EMT 140 Reverberation Unit; the first plate reverb, it bounced vibrations across a 600-pound chunk of sheet metal that had been mounted with pickups. EMT units were used at Abbey Road Studios, on albums by the Beatles and Pink Floyd.

As early as the ’40s, Hammond used a variety of reverberation devices in its B3 church organs; churches were designed to be acoustically dead, so the minister’s preaching was not disrupted by echo. At the dawn of the ’60s, Hammond engineer Alan C. Young created a small, lightweight electromechanical spring reverb. Being a musician, Young understood the needs of fellow players, so he built a unit the size of a briefcase. His invention produced an effect by inducing sound vibrations at one end of a long wire coiled into a spring (to reduce space); a transducer at the other end detected the vibrations. Hammond applied for a patent in January of ’61, and its Type 4 reverb became the industry standard. Fender licensed the design and used it to create the 6G15 outboard/stand-alone effect for guitarists, who ran signal into the tube-powered front-end reverb tank, then through their amp.

Supro had other ideas.

Supro was part of the Chicago-based Valco empire, formed in the ’30s from the remains of the National Dobro Company by three former owners – Victor Smith, Al Frost, and Louis Dopyera – using their first initials to title the firm, which launched lines of resonator guitars, electric lap steels, acoustic guitars, and amps under the brand names Supro, National, Oahu, and Airline. They also soon were building amps and other products for Gretsch, Harmony, Kay, Academy, and Silvertone. The firm became a leader in the industry – and an innovator.

Starting with its ’61 catalog, Supro offered two reverb units. The 500R Standard Reverb “expands [the] sound of your amplifier,” the catalog promised, functioning much like Fender’s outboard unit. It was clothed in Supro’s trademark blue-gray Tolex.

The 600R DeLuxe Reverb, meanwhile, offered something unique. The unit was not designed as an effect that the player directed signal through, but as an “accessory”; guitar signal ran into an amp, then through a line from the amp’s external-speaker jack into the 600R. The Reverb had three tubes with five watts of preamp boost and its own Jensen 8″ speaker. So, the Supro unit ran in tandem alongside an amp.

Ideally, that amp was a 17-watt Supro 1600R Supreme, which had a cabinet with a right-pointing arrow cutout to mirror the Reverb’s lefty arrow. What could possibly be cooler than that?

Because it worked with any amp, the 600R was offered in the ’62 Supro catalog as a stand-alone unit, while the 1600R amp was history.

This design concept was new thinking for a new effect – “the indispensable wonder sound of the ’60s,” as the catalog promoted reverb. Ultimately, though, Supro’s concept was bypassed, then forgotten. The 500R and 600R were in production only from 1961 through ’62 or ’63.

At the same time, Valco also led the way in building what may have been the first combo amp to include reverb. The National Val-Verb 60 launched in ’61 – same time as the 600R – and offered 17 watts output via seven tubes and two 10″ speakers, plus the same Hammond-licensed spring reverb. Valco was soon putting reverb in other amps built for its own brands and the amps it built for other companies.

At the same time, Fender’s Reverb tank began to prove itself, and was followed to market by Danelectro’s Model 9100 Reverb Box and Premier’s Model 90 Reverberation unit. All of these concepts were short-lived; even Fender’s tube Reverb lasted only until ’66 before being transitioned to the solidstate Echo-Reverb unit of 1966-’70, then making a brief reappearance from 1975-’78. Guitarists strongly preferred the combo with built-in reverb – which was also pioneered by Valco.

Valco may have led the way, but as the musical-instrument market collapsed in the late ’60s, the company merged with Kay in ’67, then declared bankruptcy in ’68.