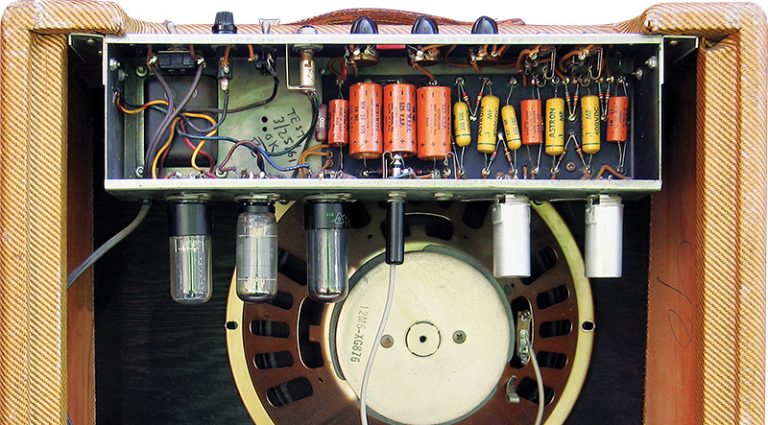 Readers of Vintage Guitar occasionally stumble on unique, prototype, or otherwise fascinatingly non-standard amps, and it’s a pleasure to share when they’re made available to us.

In an upcoming issue, we’ll feature an Ampeg prototype, but this month, we’re looking at the “opposite” of a prototype – an amp made well after the model was deleted, yet with several indicative features from the superseded design, alongside a few quirky ad-libs. And, since we can’t say exactly what it is or how it came to be, we’d welcome any informed input. For that reason, we’ll call it a “Tweed Fender Mystery Amp,” and see what we have before us.

The amplifier is owned by Robert Stamps, of Pacerville, California, an old gold-mining town in the Sierra foothills north of Sacramento. From 1988 to 2000, he owned The Amp Shop, in Reseda. One day in the early ’90s, a guy walked in with this little tweed-wrapped enigma, hoping to sell it, and Stamps snatched it up. Evidence indicates it was created as a Deluxe housed in a Vibrolux cabinet. Simply a replacement job or a chassis swap, you say? One might assume, but consider:

› › The cabinet appears to be an original Fender creation, but has never been drilled for standard mounting. Instead, the chassis has aluminum “wings” to help it fit the cab’s control-panel cut-out, which has the dimensions of the longer Vibrolux panel.

› › Everything about the construction exhibits standard Fender components and practices for the era, with the layout and wire routing that’s instantly familiar to anyone who appreciates a vintage Fender, and not a single solder connection has been altered.

One anomaly in the wiring is that ground connections in the preamp stages aren’t made to the usual brass plate mounted beneath the jacks, pots, and switches (simply because there isn’t one), but are run back to other points as used in the brownface Tolex amps of ’61 and after. Which, come to think of it, makes sense given the likely era of this amp’s creation.

Add it up, and it’s undeniably a Fender factory piece, but one set apart from standard production. What we’d like to know, therefore, is, why it was built this way, so far beyond the end of the 5E3 production run, and why with just a handful of atypical details in what is otherwise an entirely standard latter-day tweed Deluxe? It would also be great to find out for whom it was built. In this sense, it’s a true mystery amp, and none of the Fender authorities with whom we have inquired are quite sure of the answers.

A Guide to Vintage Dobros