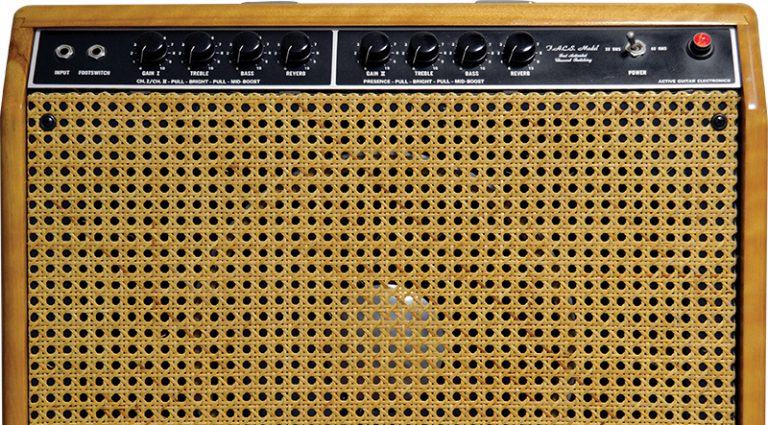 Truly a deserving name in the early era of the “boutique” amp scene, Jim Kelley is also an extremely under-recognized one. After working at Music Man amplifiers and other jobs in electronics in the 1970s, Kelley formed Active Guitar Electronics in Tustin, California, in 1978 and began building tube amps under his own name in ’79.

For the following six years, Kelley built approximately 100 amps per year, landing them in the backlines of Bonnie Raitt, Daryl Stuermer, Lee Ritenour, Vince Gill, Mark Knopfler, Jim Messina, Alan Holdsworth, and many others, while sending a great many to Japan, too. In 1984 and ’85, though, currency exchange rates and many guitarists’ predilection for rack systems and massive power amps for live use combined to knock the wind out of Kelley’s business. He liquidated his assets, closed shop, and walked away from the world of amps.

Players not familiar with the Jim Kelley ethos can be forgiven for assuming they’re some kind of Mesa/Boogie wannabe – a common mistake – given the hardwood cabs and wicker grilles employed on many examples. In truth, though, Kelley’s designs are almost as diametrically opposed to Randall Smith’s Boogies as two all-tube amps can be. In an era when nearly every other maker was obtaining high-gain sounds from cranked, cascaded preamp stages run into a Master Volume control, Kelley discerned that optimum lead-guitar tone was obtained from pushing the output stage as hard as possible without too much distortion in previous stages. It’s a view many players have taken on in recent years, pushing vintage or boutique tube amps with no Master Volume to achieve their cranked-up tones (though players certainly still enjoy both breeds of tube distortion – preamp and output – and the merits of the two remain hotly debated).

“I found this amplifier that had a great tone, and had a guy play through it while I watched its performance characteristics on the scope” Kelley said. “I immediately saw that it was distorting first, primarily in the output section.”

Further analysis confirmed the veracity of his preference for output-tube distortion.

In their day, though, Jim Kelley amps were unusual among modern designs for their lack of Master Volume controls, an omission that might have puzzled potential customers, but which made perfect sense to any guitarist (including many famous names) who actually plugged into one. To get around the issues of the massive volumes attained when pushing an output stage hard with no Master to rein it in, many Kelley amps, like this fine early ’80s FACS Reverb Model (that’s Foot Activated Channel Switching), were bundled with Jim Kelley’s extremely effective L-Pad Attenuator. As included with this FACS combo, the attenuator connects to the amp’s back panel via a four-pin cable and is engaged when the amp’s footswitch is used to activate the Gain II (a.k.a Lead) channel. As such, the dual-channel format doesn’t pair cooler rhythm and hotter lead channels like many footswitching amps, but instead engages the attenuator with the second channel so you can crank it up to push the output stage. Four 6V6GT tubes perform said output duties, producing an impressive 60 watts RMS, with a half-power switch to knock it down to 30 watts. To handle all the firepower, this combo has massive transformers, and is deceptively heavy for its size as a result. 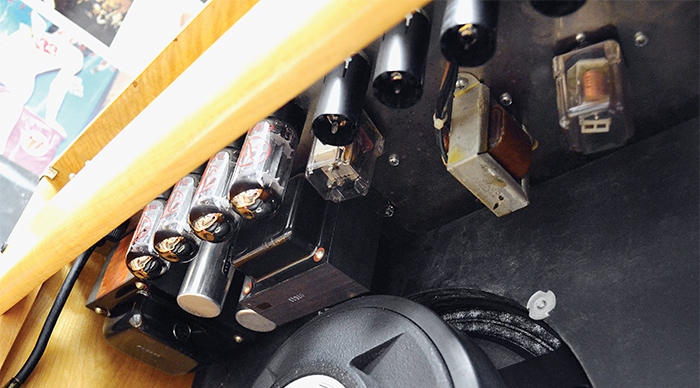 Even with the Kelley circuit’s output-leaning ethos, this amp wasn’t devoid of some clever thinking in the preamp stages. Each channel ran through three stages of gain via their respective 12AX7 triodes before hitting the driver/phase inverter, a cathodyne inverter not unlike that used in the narrow-panel tweed Fender Super, Pro, and Deluxe amps of the late ’50s. Unlike most passive tone stacks, the amp’s EQ was supplied by a simple yet deceptively versatile Baxandall network that provided both cut and boost from its respective Bass and Treble controls on each channel, with a flat response when set to noon. “I like the Baxandall network because it has an extremely wide usable range,” Kelley tells us, “and it’s hard to get a bad sound out of it. And the logic of it came easily to me.” In addition, pull-switch functions on the gain and tone pots provided Bright and Mid-Boost for further sonic sculpting.

Kelley’s reverb wasn’t ground-breaking, but was a great-sounding, tube-drive spring-reverb circuit nonetheless. Much like the classic Fender in-amp circuit, it was driven by a 12AT7 wired in parallel with half a 12AX7 to receive the signal from the spring pan, but Kelley’s was live on both channels. One spec that has often raised eyebrows is that Kelley ran the 6V6GTs at upward of 485 volts DC on the plates – hotter than even the notoriously hot-running blackface Deluxe Reverb, but he tells us that any concern regarding these numbers is unfounded. “Voltages aren’t the big issue with vacuum tubes, current is. They don’t handle high current very well, so you do have to watch the current very carefully if you’re running at the upper end of the voltage range.”

Without going in too deep, Kelley maintains a grid voltage and bias levels that keep the tubes happy, while enabling them to produce a ferocious tone in the process (Kelley says using the correct 6V6GT variant is also essential, and has long recommended NOS Sylvania tubes, for which JJ’s high-voltage 6V6 might make a suitable modern-day replacement).

Certainly, none of this is intended to imply that Jim Kelley Reverb amps were – or are – all about cranked overdrive. They’re lush, rich, touch-sensitive clean amps, too, and many players find them to be excellent pedal platforms that drive beautifully with a quality overdrive or booster pedal engaged. To some extent, such might be the thinking behind the excellent reissues made by John Suhr at JS Technologies, Inc., in the form of the single-channel Reverb Model, a faithful re-creation of the original circuit.