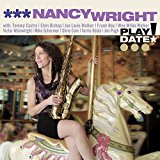 The ubiquitous saxophonist of the San Francisco blues scene for 30 years, Nancy Wright finally stepped to the fore and released her solo debut in 2009 – a fine instrumental outing in a Blue Note jazz vein.

On her third offering, the type of seasoning that comes from decades of “sideman” and bandmate work (recording with the likes of Little Charlie and the Nightcats and B.B. King) shows in her authoritative playing, singing, writing, and choice of covers.

She is joined by a formidable cast of past and present associates. In just the guitar department, we have Elvin Bishop, Joe Louis Walker, Mighty Mike Schermer, Chris Cain, Tommy Castro, and producer Kid Andersen. The latter soaks his licks in swirling vibrato in tribute to Wright’s friend, the late Lonnie Mack, on the gospel tune “Satisfied,” complete with the Plymouth Church of Jazz and Justice Choir.

Bishop trades slide licks with Wright’s big-toned tenor on an instrumental treatment of Big Jay McNeely’s classic “There Is Something On Your Mind,” while Schermer shines on the jump blues “Back Room Rock.”

Andersen’s San Jose studio, Greaseland, is fast becoming the hip place to record in the Bay Area – this being another prime example.