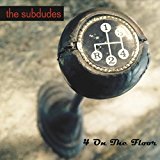 At its core, the Subdudes’ character sound is Tommy Malone’s sophisticated acoustic guitar blended with John Magnie’s keyboards, their soulful vocalizing, and Steve Amadee’s stripped-to-the-bone percussion. At times Malone’s playing is so impressive it could inspire a reverse revolution back to the early days of rock and roll when an electric guitar and a real amp were a dream and reality was a contact mic slapped on a flat top and wired through the family phonograph.

Magnie and Malone’s collaboration, “Known To Touch Me,” exemplifies perfectly how the easily identified elements work together for a result that exists only in combination. With Tim Cook sliding smoothly into the place of late founding member Johnny Ray Allen as bassist and songwriter, a string of a dozen or so live and studio albums continues with a successful hybrid of both.

The band usually ends shows by taking acoustic instruments into the crowd and performing family style. Recording live around a couple of large-diaphragm condenser mics and using Malone’s ’79 Martin HD-28 and a Magnie family Gibson J-45 of similar vintage, the band recreates the intimacy of those sets, conveying exactly why their followers are so passionately loyal.