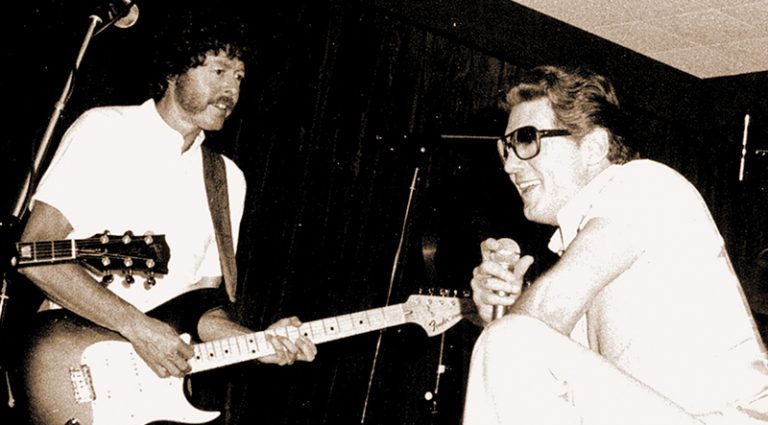 Playing behind the Killer, you wouldn’t want to hit a wrong note. Kenny Lovelace has picked his guitar with Jerry Lee Lewis for 47 years and counting, so he must be doing something right.

It wasn’t always that way, however.

“The first time I played with Jerry Lee, in 1966, I was standing right next to him, and for the last song, ‘Great Balls Of Fire,’ he kicked back his piano chair and it hit me right below the knees – and it hurt!,” Lovelace remembers. “I quickly learned to not stand there and to watch out for that piano bench.”

On early package tours and at other times through the years, Lovelace had the opportunity to play at the Killer’s side with many pioneers – Elvis Presley (“a truly nice guy,” he says), Carl Perkins (“a great guitarist and true gentleman”), Johnny Cash, Chuck Berry, the Rolling Stones, and more. He has also served as Lewis’ bandleader and songwriter, and along the way cut two solo albums – Twenty Years Over Night, in ’86, and Back to Rock’n’Roll, in ’06.

“Those 47 years seem to have gone by in a flash,” he said before hitting the stage with Lewis for a recent show in Memphis in support of the Killer’s CD Rock & Roll Time and autobiography Jerry Lee Lewis: His Own Story.

In the book, co-author Rick Bragg queried Lewis, “Who of all the greats would he chose to play with if he had his wish – Elvis, Hank Williams, anyone?” Lewis pointed at Lovelace.

“I learned to played when I was four or five years old, growing up in the Muscle Shoals area,” Lovelace remembers. “My mother pushed me. I had a potato-bug mandolin, and she taught me chords on that. Then, my dad bought me a fiddle for $10, but it only had the first two strings, so I learned to play a hoedown on those. I asked him to buy me the other two strings, and then I really went at it.”

In his teens, he joined a local country band called first the Go-Go Boys, then the Five Jets; they played together for some 15 years.

“The first rock and roll I heard was ‘Whole Lotta Shakin’ Going On’ on the radio in Florence, Alabama, in 1957, and I just thought it was great. Our band heard rock and roll and just fell into playing it, adding a new rhythm and drive to our playing.” 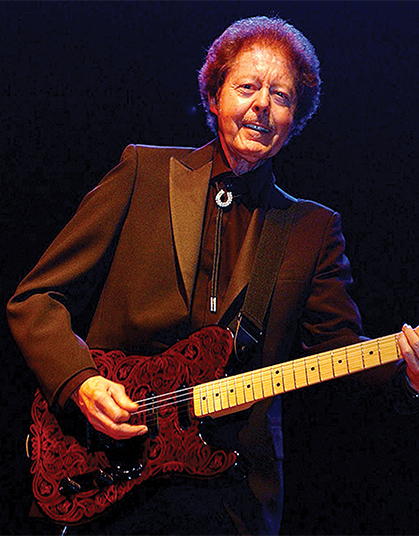 Lovelace met Lewis in Monroe, Louisiana, where the Five Jets played a regular gig at a local club with Lewis’ sister, Linda Gail Lewis, on vocals.

“She told him about us, so he and his manager came to check us out. They sat right there in the front row, and we were all up on our toes trying to play our best. We played a mix of some country music, a couple songs by the Platters and Elvis, and all of Jerry Lee’s hits.

“Afterward, he tried to hire the whole band, but the others were hanging it up. I said, ‘If you’ll take just me, I’m ready.’ And that was the start.”

In those days, Lovelace played a ’56 Strat that he got in a trade from a singer for Lovelace’s ’46 Plymouth – and the singer also had to ante up an additional $100. Lovelace played that guitar with the Killer for some four decades.

“I always loved Strats and Teles for playing country and rock and roll,” he says. “I also played an SG for a while. A couple years ago, James Burton gave me one of his signature model Teles that I play now.”

His main amp has long been a Twin Reverb; today, he uses a ’65 Twin Reverb reissue.

“I never got used to pedals,” he says. “I just use my guitar, the amp, and some reverb.” That bare-bones setup seems to have pleased his boss.

Over the years, Lewis recorded with many of the greatest rock and roll guitarists – including Sun Studios’ Billy Lee Riley and unsung rock guitar pioneer Roland Janes – and certainly had his pick of axe men. So, what’s the secret to playing behind the Killer?