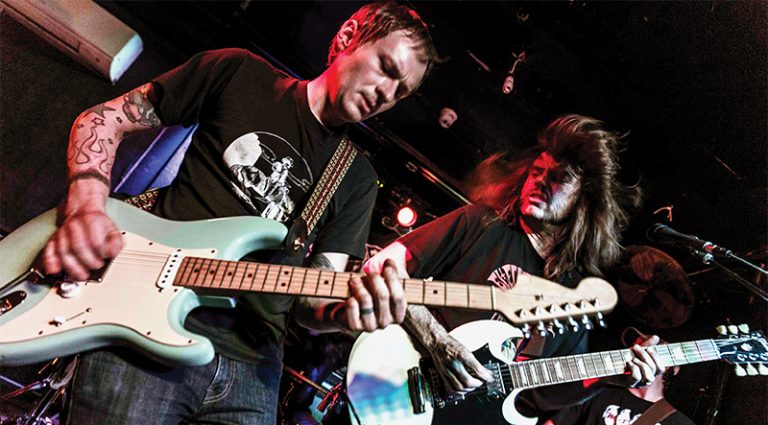 What guitars and amps did you use on the album?
Erik Sugg: I used a ’72 Telecaster reissue on our first album, Leave the Light, but for Tempora Infernalia, I switched gears entirely and used a Les Paul Traditional Pro II. Listening back, I can tell I was still getting used to the coil splits. Overall, I’m very happy with the tones, but in retrospect, if I could do it over, I might do a few things differently, like using a Stratocaster on certain parts. For amps, I mainly used our engineer’s Orange Tiny Terror. On some tunes, I used clean boutique amps and tried different gain pedals. The T.Rex Crunchy Frog stood out.

Larry Burlison: I mostly used my ’91 American Stratocaster with Lace Sensors, which is the first electric guitar I owned. I also had my 2013 Strat, which has a Warmoth neck and a Lace Hemi Humbucker, and a Squier Strat with DiMarzio single-coils. I used the Orange Tiny Terror and a new DOD Overdrive Preamp 250 on every track.

Where was the album recorded?
Sugg: Seriously Adequate Studios, in Carrboro, North Carolina – same place we recorded the first album. We also had it mastered at Verdant Studio, in southern Vermont, another repeat for us. Those are owned and operated by Alex Maiolo and Pete Weiss, respectively, and those guys have been crucial in helping us achieve our sound. Not only are they both good friends, but their own technical knowledge and their own stellar musicianship really helped us get some great tones.

You try some different approaches on this album. “Poison Garden,” “Give Up the Ghost” and “Please, Father” spring immediately to mind.
Sugg: We were trying for something different, and with those tunes in particular. Even though we were very pleased with Leave the Light, we didn’t want to do the exact same thing all over again. “Poison Garden” was sort of an ode to Pagan Altar, a band I really love. With “Give Up the Ghost,” I wanted to do something more on the prog spectrum, but I didn’t want to get too radical and have a Yes-like arrangement. And for “Please, Father”… I know this may sound corny, but it came to me in a dream (laughs). Nothing too dramatic, just me and the band playing the song while I kept singing the weird prayer-like refrain over and over. When I woke up, I remembered the words and melody.

The vocal on “Please, Father?” has a great Black Sabbath/“Planet Caravan” vibe. Did you go through a Leslie?
Sugg: It’s an old Motion Sound amplifier and a lot of reverb. I wanted to go for a hushed vocal, something that sounded like it was coming from an old radio transmission, like an S.O.S. Alex said, “Oh, I have just the thing for you,” and busted that bad boy out. It was a lot fun playing around with those sounds.

“In the World, Not of It” has a nice opening riff that drips with a phasor or Uni-Vibe.
Burlison: It’s the new MXR Uni-Vibe. I’d been listening to Robin Trower’s Victims of the Fury a lot around the time I came up with the riff. I love how Trower sounds like his riffs are actually controlling the sound of the Uni-Vibe and his vibrato compliments the warble of the effect. Kind of like the way you control a wah rather than just having an effect swirling in the background or underneath. The sound changes with and is accentuated by the riff. I was going for that. Live, I’ve been using a new DOD Phasor 201.

You two have great interplay and connection, reminiscent of classic dual-lead-guitar groups. How do you work out solos and parts?
Burlison: We show up to rehearsal to try a new song and we’d almost always have the complimenting parts down automatically. I think we both just stay aware of where the other tends to play their licks or keep an ear open to where they are and just naturally take over the other part. I also learned guitar by listening to Iron Maiden’s Powerslave!

Sugg: I agree. After playing with someone for years and writing tunes together that you both feel really good about, you start to get an almost sixth sense. But, as much as we love Iron Maiden, Thin Lizzy, and other harmony masters, we seldom sit down together and work out an intricate harmonized solo.