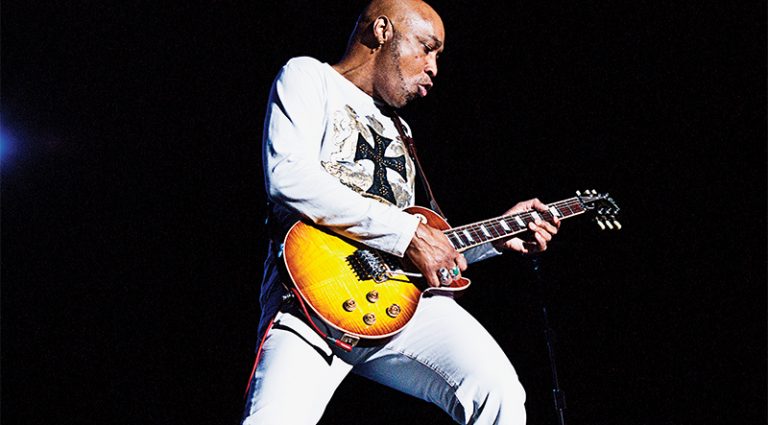 Music fans might remember Vic Johnson as the wickedly eclectic guitarist from the ’80s band The Busboys; it thrived in heavy rotation in the early days of MTV, appeared in the Eddie Murphy blockbuster 48 Hrs., and enjoyed a hit album with Minimum Wage Rock & Roll. In the years since, Johnson made his mark in Sound Barrier and Total Eclipse, and since 1997 has been Sammy Hagar’s right-hand man.

His new project with Hagar is called The Circle and features bassist Michael Anthony and drummer Jason Bonham. The album is called At Your Service and showcases not only Johnson’s intrepid guitar chops, but also his talent as the album’s producer.

Where do you come from as a guitarist?
I grew up in the Colorado Springs area, so I was listening to a lot of Hendrix, Ten Years After, Grand Funk Railroad, and Vanilla Fudge. I was a Rocky Mountain kid listening to that kind of stuff. I loved Cream, Mahogany Rush, Zephyr… I saw Tommy Bolin when I was 13 and saw Rush with their original drummer. I would see these guys and take it all in. I’m self-taught on guitar.

I moved to L.A. in ’78, and by then had learned quite a bit. We did a lot of Jethro Tull and Yes, and I also knew a lot of Top 40 stuff like Earth, Wind & Fire. I joined a cover band called The Infallibles and we thought we were going to get signed to Casablanca Records. But then the singers tried to get rid of the band (laughs).

How did you end up with The Busboys?
They needed a new guitar player, so I went to watch them at Madam Wong’s. I thought, “This is that new-wave/punk thing…” This was 1980. I thought they were pretty good, but I was like, “Is this what I really want to do?” The club was crazy packed!

Your background was in heavy rock.
Exactly. I’d seen Van Halen at the Starwood, and that was a lasting impression. The Busboys were very popular. Madame Wong didn’t want a black band in her club, but The Busboys ended up becoming the house band. I auditioned for them three times; Brian O’Neal (keyboards/vocals) was really workin’ me. “Yeah, you’re pretty good, but we’re going to listen to this other guy.” (laughs) Five months after I joined the band, Clive Davis came to Madame Wong’s and signed us.

That must have been a crazy time.
Our music video was played on MTV before Michael Jackson or Prince. Then we got to know Eddie Murphy, did that scene in 48 Hrs., appeared with him on “Saturday Night Live,” and went on his Delirious tour. It was a trip.

What was it like to audition for Sammy Hagar?
I got a call from a guy at Disney who said Sammy was looking for a guitar player. All these typical guitar players showed up – tall white guys with blonde hair. Sammy didn’t want that. I ended up being the guy. It was quick. He called me the next day; he had a tape with samples of my playing. He flew me to his house and we started playing “Space Station #5,” “Heavy Metal,” and “Rock Candy.” He just sprang them on me. He had just got out of Van Halen and he was over it, so we didn’t play any Van Halen. He was back doing his solo thing. In rehearsals, we learned a bunch of Sammy songs. It ended up being an 18-plus-year deal.

What’s the concept behind The Circle?
Sammy comes up with ideas and I give him hints as to what he can do. He’s a solo guy, but this is his most band-oriented project. Sammy has known Jason Bonham for a while. We played a couple of Led Zeppelin songs on the spur of the moment and it was cool. We thought we’d have him come and mix it up – play some Zeppelin and Van Halen tunes. It’s for the fans and Sammy sings the s**t out of these songs. We also use Sammy’s old drummer, David Lauser, for the classic solo material. Michael Anthony knows all the solo material from playing in Cabo, and, of course, the Van Halen stuff. The Circle is an equal thing – not just “The Sammy Hagar Show.”

You have a signature amp.
Yeah. It’s called the 4550, by David Bray, of Bray Amplifiers. It’s based on my 100-watt Marshall that he modified for me. It’s outstanding. I love it with the ’58 VOS Les Pauls and the PRS 513. It does everything. Sammy and I will be recording new songs with this new band, and I’m really looking forward to it.