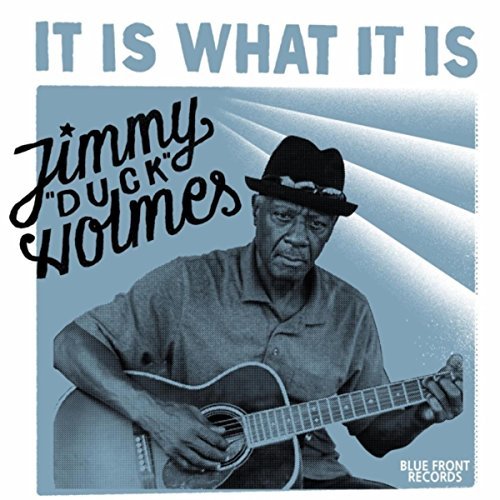 The unique and insular Bentonia style may be the deepest and darkest of all blues. Skip James personified the music: he sang haunted songs in an eerie, high-pitched voice that would send a cold shiver down even Robert Johnson’s back. Henry Stuckey was the first known musician to come from the remote Mississippi crossroads; he was followed by James, Jack Owens, and others. Many songs were traditionally played in a signature open E guitar tuning.

Jimmy “Duck” Holmes keeps the vintage Bentonia blues alive. His parents opened the famed Blue Front Cafe juke joint at the crossroads in 1948; Jimmy has run it since ’70. Today, it remains the oldest surviving juke in the state.

The latest of Holmes’ six albums was recorded at the Blue Front, giving listeners a front-row seat to the historic venue. Even with the cinderblock-wall acoustics, the sound is live, rich, and personal – you can even hear the ceiling fan whir, a train passing in the distance.

The album was funded by a Mississippi Arts Commission grant, and the legendary Dick Waterman – who represented James, Son House, and Mississippi John Hurt during the blues-revival years – came out of retirement to help promote Holmes.

The album opens with a solo electric jam on the traditional “Buddy Brown,” Holmes’ chanting backed by his furiously overdriven guitar in a free style that’s half raga, half boogie.

“Pencil And Paper” follows, a modern-day tune that sounds straight out of James’ 1930s repertoire – or perhaps even one of Bukka White’s Parchman Farm laments. Holmes’ resonant voice is accompanied by his ringing acoustic guitar, creating a mesmerizing, trancelike aura.

He covers James’ trademark acoustic song, “It Had To Be The Devil,” with overdriven electric guitar and a moody echo sound thanks to the café’s ambiance. The combined result proves this is not just a reheated cover.

When Holmes gets his mojo working, he sounds like a combination of the Bentonia greats and the later-day Hill Country players like R.L. Burnside and Junior Kimbrough. His themes are dark and moody, and his guitar work is simple yet stunning, building a hypnotic reverie on each track.
Holmes is no modern-day revivalist cashing in on Mississippi Blues Trail tourism. Instead, he proves that the real blues are indeed not dead and buried.

If you’re a deep blues fan, this is an essential modern recording.