Long overlooked and relegated to an obscure corner of the collectible market, Sigma by Martin guitars have recently gained popularity among a new generation of collectors. If you’re one who has developed a taste for them (or other vintage Japanese brands), you likely know that Martin – as it readily admits – kept few notes regarding the Sigma line.

Thus, there is scant information on the brand – mostly anecdotes in far-flung strands of the internet; suppositional at least, unsubstantiated at best. In an attempt to remedy the situation, we offer this guide to the essential information on the enigmatic brand.

Seeking to compete in the market for budget-grade instruments, in 1970, Martin began importing acoustic guitars made by subcontractors in Japan. The instruments employed economy-minded materials like laminated woods for their tops, sides, and back, but were generally well-constructed. The initial batches had a zero fret, covered truss-rod access, and bridges with a saddle “elevator.” Roughly 20 models were offered; the classical instruments had slot pegheads, while the acoustic flat-tops were characterized by a flat headstock reminiscent of a chef’s spatula (and now nicknamed as such), with the logo consisting of a gold decal of the word “Sigma” surmounted by the corresponding Greek letter (∑) in mother of pearl.

Some very early DR-7 and DM-5 batches had what collectors call an interior “type zero” white label with a black border and the Gen I logo printed with “Produced and distributed by C.F. Martin & Co., Nazareth, Pennsylvania, USA.” The model designation was usually hand-written in ink along the bottom border.

By late ’72, the zero fret was being phased out and the saddle made non-adjustable, but still perched on a fixed bridge… except on the 12-string DR-12-7 – a fact that plagued Martin sales reps, who were advised to “convert” dealers to the DM-12-5.

Beginning in ’73, certain lower-end models were manufactured in Korea, setting a pattern of multi-country/multi-manufacturers that continued throughout the run. 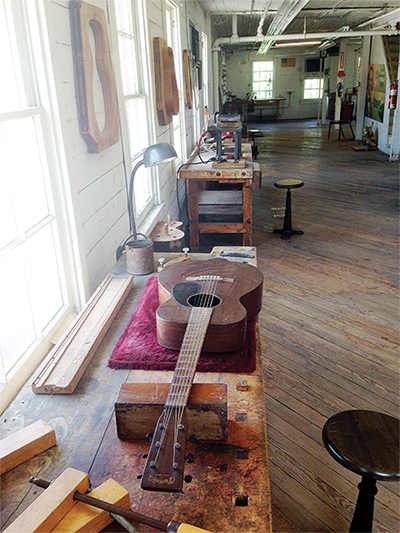 By 1974, the initial Gen II instruments had arrived, and while they retained the spatula headstock and covered truss rod, they turned things up a notch by introducing solid tops.

Those tops were part of the upgrades on three models – the DT-22, DR-11, and DR-9 – which also sported a tapered headstock closer to the modern Martin; company documents referred to the design as the “type S” peghead. Other twists for Gen II included a line of five Tokai-made electric solidbody guitars, and the first non-guitar – the SB-5 banjo.

During this and later periods, Sigma actually made several types and models of acoustic and electric guitars, but they were mostly exported to Europe and distributed through Levin & Sons, a Martin-owned company based in Sweden.

In ’76, Gen II Sigmas made in Japan were introduced with the type S peghead, a new logo, different label, and other changes to synchronize with Martin’s domesitc models. In addition, several new solid-top guitars were rolled out, along with beginner and intermediate instruments. In a 1979 brochure, these were duly delineated as the 7, 5, and 3 series; models with higher numbers were given higher-quality materials and more-attentive craftsmanship, as well as overall quality and quantity of appointments.

In 1980, the line was expanded to include the SA-1 mandolin and SB-226 and SB-229 banjos. Also, the model numbering system used on guitars was rearranged to even more closely align with Martin designations (a move seen as good for marketing). Paper labels were phased out in favor of a pressure-incised oval on the back brace inside. Collectors call this the “football stamp,” and it reads “Sigma Guitars/Made in Japan For C.F. Martin & Co.” This continued for a few years, until the company began building in Korean, and returned to paper labels.

While it was long believed that the serial numbers of Sigma instruments were of little use in dating the instruments (except on the DR-28N and DR-35N, which were assembled and finished in Nazareth in 1981/’82 using Japanese-made parts and marked “Made in USA”), today there is a basic understanding of how they work, based in part on the many factories that produced Sigma instruments.

In 1983, the bulk of production was moved from Japan to South Korea, where the line underwent a huge expansion. Gen II solid-tops, however, were still made in Japan.

Each year, as new Korean-built models were introduced, some older models were retired or re-named. By ’84, Sigmas could be purchased with the Martin ThinLine 332 pickup and V.T.C. (volume and tone control), which required no installation and had a ¼” output jack. These were at first supplied by Barcus-Berry, then later by Fishman. In ’86 came the thin-bodied TB guitars with three-band EQ and transducer pickup. The electronics proved popular, and soon crossed over to become standard on many models (an electric/acoustic version became available in nearly every model category).

In 1988, the entire line was again re-named and re-categorized. New solid-top models were given SDM and SDR prefixes, and while it has long been speculated the S denoted “solid,” the ’88 catalog and spec sheets clearly indicate it meant “scalloped” – as in, hand-scalloped bracing. All Gen III solid-tops carried Martin’s warranty. Also introduced on some was the “age toned” top finish intended to better replicate a vintage guitar.

The Marquis Series (sometimes referred to as the 4 Series) guitars had scalloped-brace tops, cast tuning machines, and pearl inlays at the 12th fret. The line included the CS-4 classical, GCS-4 grand concert, dreadnought DM-4 and DM-4S (with sunburst finish), the mahogany-stained/spruce-topped DM-4M and DM-4Y (with “age toned” top), and the Venetian-cutaway DM-4CV.

Decades before other companies recognized their potential, Sigma unveiled two dreadnoughts that employed exotic woods – the distinctive Oriental Chestnut DT-4N and the DV-4, which had a spruce top and ovenkol body. Like their Marquis brethren, they carried a 10-year warranty.

The 2 Series, touted as the budget line, nonetheless included features mostly found on upper-end models – Grover tuning machines and “scalloped-style” top braces to go with their laminated top, back, and sides. Models were the mahogany CS-2 and rosewood CR-2 classicals, the mahogany grand concert GCS-2, the dreadnought mahogany DM-2, the rosewood dreadnought DR-1 and DR-2, and the mahogany 12-string DM-12-2.

Gen III mandolins were given a new designation system; the SM-1 was an A style, the SM-3 a two-point Florentine, and the top of the line SM-6 (sometimes called SM-10, SM-30, or SM-60) boasted a solid, carved top with a scroll and other high-end appointments. These were first-class Gibson knock-offs and are today highly valued by collectors. There were also three styles of banjos – the inexpensive SB-10, the midrange SB-25 (with a brass tone ring and a clear resonator), and the top of the line SB-80. It is thought that all mandolins and banjos were produced by Iida, in their Japanese and Korean facilities.

Circa 1993, Sigma introduced two Gibson-knock-off jazz guitars – the SEJ-35 and the SEJ-75. Beautiful and skillfully crafted (in Japan), they sold for $929 and $1,049 respectively and today are highly sought-after.

While advanced collectors continue to value Gen I and II Sigmas made in Japan as the highest-quality/most-desirable examples, for the sheer scope and ambitious breadth of the line at its height, Korean-made Gen III instruments are not far behind. So many makes and models were created, expanded, changed, retired, and re-named – it was the great flowering of the line.

In 1996, most production was moved to Taiwan and Indonesia, and almost all promotion and trade advertising ceased. Some new models were introduced – the DM-4B, DM-4L, solid tops CS-ST, DM and DR-1ST, and the FD-16M – while a core of established models remained, though one by one they faded from price lists, inventory manifests, and catalogs.

Sigma inspection and repair operation at the old Martin factory on North Street was curtailed and moved to the plant at 510 Sycamore Street, where it fizzled. By ’97, no more than five percent of Sigmas were being delivered to Martin for inspection while sales and marketing shifted to an in-house program known as Martin Telesales. The bulk of these instruments were shipped directly to dealers and end-users, bypassing Nazareth entirely.

The final Telesales catalog to feature Sigma instruments was published in late 2006. By the end of ’07, stock had been disposed, marking the end of a 37-year run for the line.

Kevin Dunham repairs and restores guitars, operates nossigmamartinguitars.com, and maintains a blog on Sigma guitars. He is compiling information for a book on the brand.