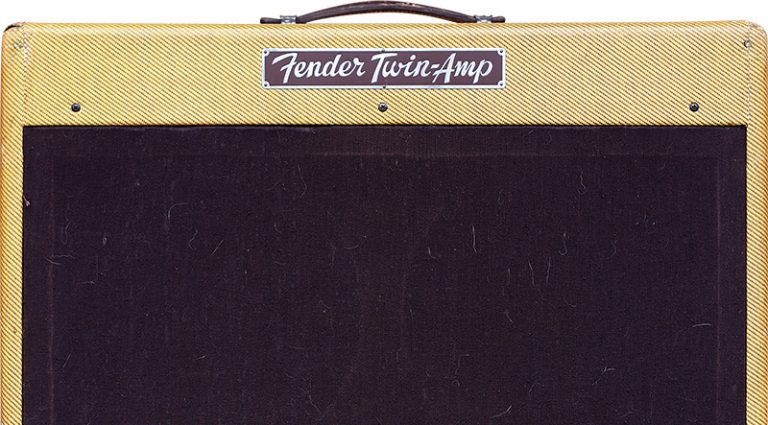 An (arguably) more-playable amp for the average guitarist, the low-powered 5E8-A of 1956-’57 is the most copied among boutique builders, but this wide-panel ’54 5D8 has an awful lot going for it, too, especially for any player wanting tweed-Deluxe-meets-Twin tone in a package that’s adaptable to just about any venue.

A particularly short-lived version of the model, this particular 5D8 has a great back story. But first, let’s take a look at where the model sits on the evolutionary ladder of classic amps.

Upon its introduction at the 1952 NAMM show, the 5C8 Twin was the flagship of a new lineup. It was the first Fender with two 12″ speakers and the first to carry independent Bass and Treble controls. It also had an unusual tone stage driven by its own 6J5 single-triode tube, which followed an octal 6SC7 preamp tube in each of the two preamp channels, with another 6SC7 in the paraphase inverter. In 1954, however, the 5D8 version launched with the cathode-follower tone stack that would have such an impact on the tone of larger Fender tweeds through the rest of the ’50s, then be adapted to Marshall and Vox amps (Vox allegedly copied its Top Boost from a later Gibson amp, but it’s the same basic circuit with a few variations). The new iteration also gained a Presence control derived from the negative-feedback loop, but retained the paraphase phase inverter common to the wide-panel tweeds, as well as the 5C8’s cathode-biased output stage. It stepped up to the new nine-pin preamp tubes, using 12AYs in each of the two channels for Microphone and Instrument, another for the tone stage, and a 12AX7 in the driver/phase inverter. All this aside, the unusual thing about the 5D8 was that after the first several appeared using a 5U5G rectifier, Fender adopted dual rectifier sockets with a pair of 5Y3 rectifier tubes, to maintain reasonably robust current draw while achieving the B+ voltages desirable for the circuit.

Add up the bits and pieces, and the 5D8 presents a pretty robust soundstage, with its 25 watts of power and two 12″ Jensen Alnico speakers. The phase-inverter topology and cathode biasing bring juicy, harmonically rich, midrange-forward breakup, which the cathode-follower tone stack helps to drive a little further (and with useful frequency tweaks to the players’ taste), while the negative-feedback loop reins it all in just a hair and helps maintain some tightness in the lows. To use our two most familiar tweed touchstones, it’s a nifty blend of Deluxe and Bassman. Changes made to the narrow-panel 5E8 and 5E8-A circuits after 1955 brought in more headroom and a little more output power, but rendered a tone that’s more “different” than “better,” depending on your preferences. 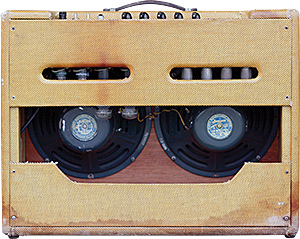 This sweet, clean ’54 5D8 is owned by VG reader Paul McNabb, and it represents a great ending to the kind of “one that got away” story that can be told by so many players.

“The first time I purchased the Twin, I was 14 and the amp would have been about 16 years old at the time,” he said. “I paid $200 for it to a local player who was in one of the most popular bands in our area. I kept the amp for a couple of years and then sold it, likely because at 14, all I was concerned with was volume, and I wanted something louder.” But that’s not the end of the story…

“About 20 years ago, I started searching for the Twin,” McNabb continues. “Over the years, it changed hands three or four times, but I always seemed a one step behind – until a series of events pointed me to an avid collector in rural Tennessee. I was able to determine that he had purchased the Twin from a collector about 100 miles from me and – more importantly – confirm this was indeed my old Twin by the staining of the tweed that had happened when the amp’s third owner experienced flooding in his basement. I stayed in touch with the Tennessee owner and, over three or four years, finally convinced him to sell.”

This time, McNabb adds, the amp cost him rather more than $200, but the reunion was well worth it. Other than the relatively minor water staining on the bottom of the cab, the amp came home in original condition. Fully intent on playing the amp, McNabb replaced some leaky filter caps (with four large blue 16µF Sprague Atoms and smaller black 8µF and 25µF caps you can see inside the chassis) and added a grounded three-prong AC cord. Other than that, it remains largely as it left Fullerton 61 years ago. 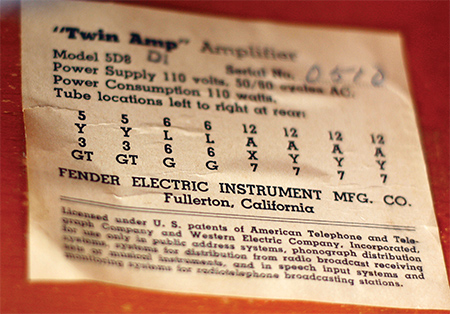 “I run the amp with an Amp Preserver so my line voltage is at 110, as intended,” he said. “I prefer to plug my guitar into the Microphone 1 input, and find the 25 watts into a pair of 12″ speakers to be a perfect fit – low enough wattage that the sweet spot can be found at a reasonable volume but enough power for most any gig. With the dual rectifier circuit, the Twin has lots of clean headroom and more focused low-end than a comparable low-watt tube amp might exhibit. With a Strat or Tele, it starts to growl at about 8 on the Volume control – which goes to 12 – and of course a P-90 or humbucker-equipped guitar gives up the goods earlier.”

All in all, that’s what we call a happy ending. And if you’re looking for your own reunion with a chunk of early-tweed goodness… don’t bother calling McNabb. “Now that the Twin is back home, I can assure you that it’s here to stay!” McNabb said.