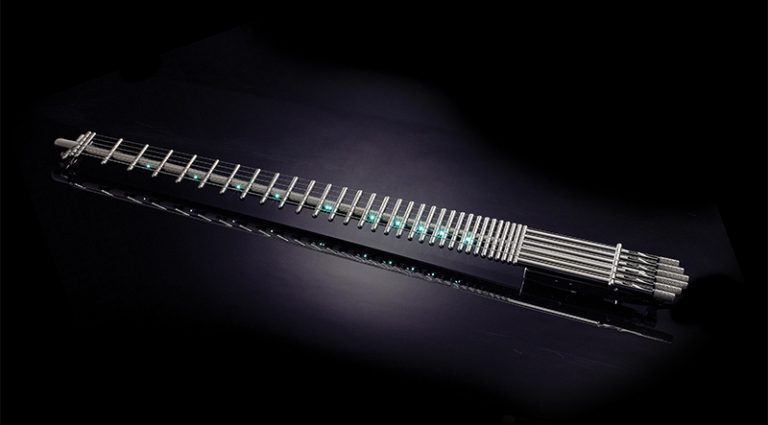 The Gittler guitar was invented in the late 1970s by Allan Gittler, whose vision to reduce the guitar to its most essential elements led him to design an instrument that looked like a cross between modern art and a musical fishbone. The instrument gained a following that included Andy Summers of The Police, who famously featured one in the video for “Synchronicity II.”

After a hiatus prompted by Allan Gittler’s death in 2002, the Gittler guitar recently returned via his son, Yonatan, and a team of builders who have updated the design. The new Gittler Classic features all of the metalworking precision and novel aesthetic aspects of the old, with modernized electronics and MIDI capabilities that keep it cutting-edge.

The Gittler is a little over 30″ long and 2″ wide, and ships in a carrying case that will have people thinking you’re a pool shark carrying your cue. The all-metal instrument is made of 31 titanium rods that act as the frets; the lack of a fretboard means that you press down for pitch bends or vibrato, a la scalloped guitar necks and sitars. An easily installed plastic guard gives the fretting hand the feel of a traditional neck (even as the instrument remains fretboard-less).

The rear-mounted tuners are Teflon-coated and offer smooth, incremental adjustments via the player’s picking hand. The electronics consist of an individual pickup for each string; their output is balanced using trim pots inside the body. There are controls for Volume, Treble, and Bass, and features include a ¼” output jack, and a D-13 output that is Roland-compatible for MIDI. The D-13 also attaches to a breakout box that supplies power to the fret-mounted LEDs when not being attached to a MIDI unit.

As you might expect, the physical feel of the Gittler requires a bit of adaptation, being as different from a conventional guitar as it can get, with the lack of body. The strap attaches via an adjustable balancing arm that helps it hang to the player’s satisfaction.

Through a Fender Deluxe Reverb, the pickup/preamp was enough to over-drive the amp’s front end if desired, while the Treble and Bass controls helped quickly contour the sound to our liking, allowing easy changes from fat and warm to twang-filled and stringy.

Fretting notes on the instrument is easy, as its action is very low and it’s strung with light-gauge strings to accentuate the neck and rounded frets. With the left hand, a player can change pitch bends via downward pressure; it’s easy to get half-/whole-step bends. Also, whole chords are easily given vibrato, and pedal-steel bends that would have been impossible on a standard guitar are a breeze thanks to being able to bend without running into other strings.

The aspect that took the most time to settle into was the lack of clearance between strings and body. Picking, whether with plectrum or fingers, requires a much lighter touch to avoid contacting the guitar as part of the motion.

The Gittler is a joy to hold and boasts an admirable level of care and attention to detail in its machining and polish. Though far from traditional, this instrument is an amazing piece of art.

The Gittler Classic is a worthy update. All these years later, its design remains revolutionary in terms of look, feel, and tonal possibilities, with the benefit of updated electronics. Though it demands adjusting one’s technique to fully realize its possibilities, the results are gratifying.