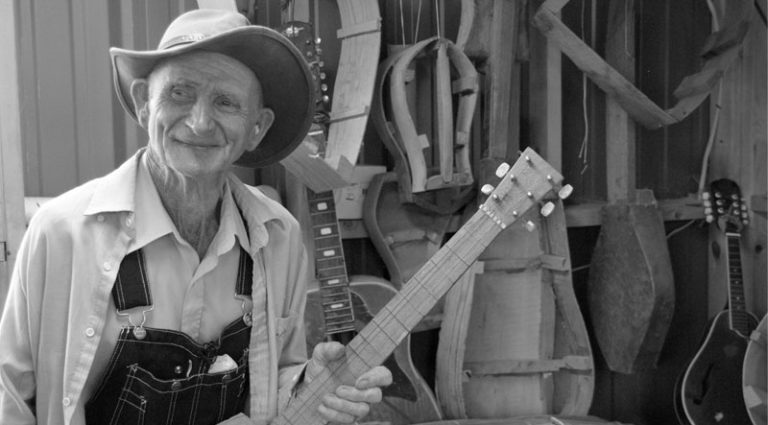 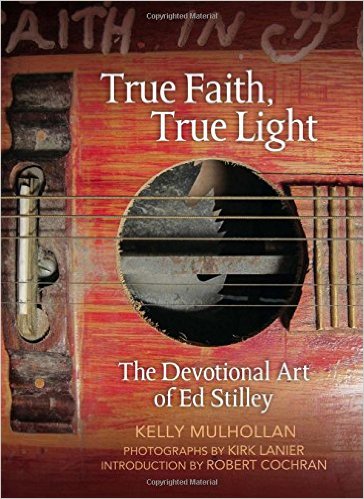 Arkansas farmer Ed Stilley was plowing his fields in 1979 when he was struck down by a heart attack; lying in the dirt, he had a vision that God wanted him to build guitars and give them to children around the country to make music. Once recovered, he began crafting instruments of his own design, chronicled in this gorgeous book.

With no experience building instruments and using just the hand tools around his farm, Stilley devoted himself over the next 25 years to creating more than 200 instruments. He gave them away to kids all over North American, and today they’ve become folk-art collector’s items.

Each of Stilley’s guitars, banjos, fiddles, and dulcimers was one of a kind, a sort of handmade crazy quilt of found objects that he added to try to create a special sound. And each of them was inscribed on the lower bout with the words “True Faith, True Light, Have Faith in God.”

Stilley’s homegrown “innovations” were ingenious if crude. He added a cast-off iron cooking pot as a resonator to one banjo. He placed a pipe in one guitar’s neck block to serve as an echo tube. Built-in reverb came courtesy of old door springs and circular saw blades. But his masterpiece may have been his Jingler: a loosely fitted chunk of metal added to the truss rod that jingled with the strummer’s rhythm. All of these inspired concoctions served “To better speak the voice of the Lord,” as Stilley explained.

This book tells Stilley’s intriguing story, highlighted by stylish photos of many of his instruments, along with X-ray images and diagrams revealing their secret innards. Recordings of the man playing his instruments and preaching are available on the author’s website.

This article originally appeared in VG‘s August  ’16 issue. All copyrights are by the author and Vintage Guitar magazine. Unauthorized replication or use is strictly prohibited.