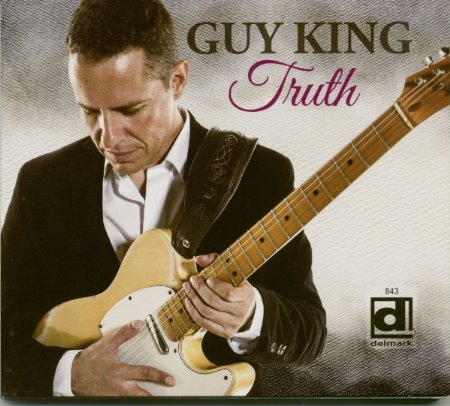 Blues veteran Guy King steps out with a full big band on his latest and proves up to the task of doing justice to various forms of American music – blues, funk, soul, and everything in between.

King serves up B.B. King-influenced licks on “A Day In The Life With The Blues.” He marks his solos with wide bends and a vibrato that hint toward B.B.’s greatness without surrendering his own personality on the instrument.

That is a unique ability King has. He’s able to show off influences like Ray Charles, Albert King, Percy Mayfield, Johnny “Guitar” Watson, and plenty of others without losing his own musical identity. He even finishes the record with a cover of the 1981 Quincy Jones–James Ingram chestnut “One Hundred Ways” and makes it fit beautifully with a heartfelt vocal and soulful solo. Whether covering his heroes or playing originals (many co-written with music biographer David Ritz), King makes this music fresh and vibrant.

It’s significant that this is King’s debut for Chicago’s Delmark Records. That city, and one of his heroes, Buddy Guy, has welcomed him with open arms. And, it’s well deserved.