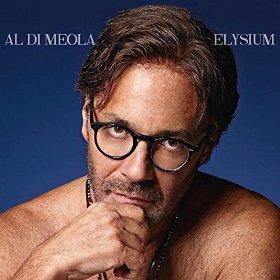 Throughout his 40-year career, Al Di Meola has worked in several different styles, the common denominator being Latin music. On this new album, he delves into what might be termed his “World Sinfonia” style, based on his Latin-world group of the past 25 years. It’s intricate, tightly arranged music with Spanish, Italian, Brazilian, and Argentinian influences, mixing in Baroque structures and the guitarist’s acoustic and electric virtuosity. Elysium isn’t a ’70s fusion-fest; it’s Di Meola playing serious and highly dynamic instrumental music.

The opener “Adour” jumps between major and minor tonalities on a dime, Al deploying acoustic arpeggios under an overdriven electric melody to create a mysterious Latin vibe. “Babylon” has a driving beat and finds the guitarist on nylon string, deploying dark Phrygian textures.

“Purple And Gold” has more intoxicating acoustic textures. Here, Di Meola’s acoustic arpeggios are heightened with light guitar-synthesizer in the background to lovely effect. Later, he drops in his patented high-speed alternate picking on electric, and it’s thrilling.

Granted, there are Al Di Meola fans who only want to hear the New Jersey native shred on his black ’71 Les Paul Custom, but on Elysium, the guitarist demands that we listen to this rich Latin music with deep intent. Those who do will be greatly rewarded.