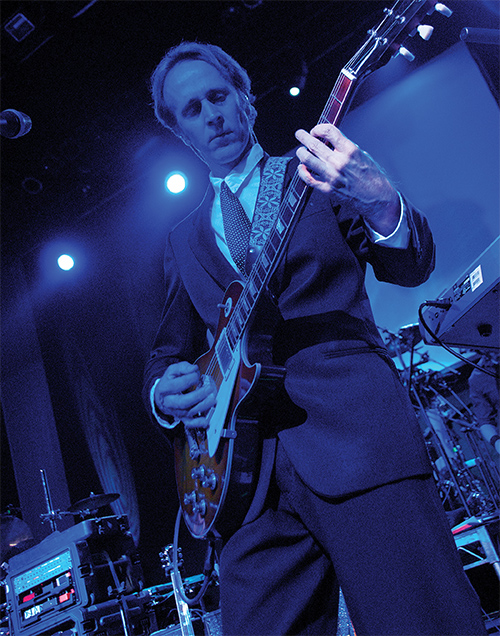 Was there a theme when you started recording Alleys?
A lot of the tunes started with 10-second snippets I fleshed out or married to other snippets from other eras. I had Mike Keneally involved, and he was great. He can hear something and go, “You should go here with it.” I needed somebody to crack the whip and navigate the waters of my neurosis.

I didn’t want to make a typical guitar album, and I didn’t want a shred record because that’s not where I live as a player. Guitar records try to fit into all these different bags, and I didn’t want that… I had a better idea of what I didn’t want, than what I did want. What we wound up with was a good overview of what I’m about. Midway through the project, it dawned on me that it’s really cool. Not anyone can just call up Mike Keneally and say, “Hey, wanna help with my record?”

Your improvisations have a intervallic quality without sounding like fretboard patterns.
It’s a conscious thing. Because the guitar is such a pattern-based instrument, you tend to fall into fingering patterns and shapes. I went through a period where I was as “unpattern based” as I could. It’s tough, but I strive for it. Getting the Zappa Plays Zappa gig certainly helped. So much of that music was composed “un-guitaristically,” and you have to execute melodic passages that are not built around guitar licks. Frank Zappa was composing for many instruments. He wasn’t thinking, “How would I execute this on guitar?” It’s a good workout. Dweezil said, “This is like training for the Guitar Olympics (laughs).”

Was it intimidating, performing Zappa compositions?
We weren’t afraid. We did “G-Spot Tornado” which was a synclavier piece that I believe was never intended to be performed. Then, the Ensemble Modern started playing it. People would hear it and be like, “You have got to be kidding me!” It was a good feeling to execute that, and play it the way it was composed, without having to cut corners or make concessions.

How did that inform your own songs?
Quite a bit, but not in ways I was outwardly conscious of. There was more of a rhythmic influence. I hadn’t been involved with a lot of projects where I had to execute odd meters. It was a crash course in really feeling it, counting it, and executing it. If there’s any sort of outward influence, that’s it. Those grooves feel comfortable now. They’re fun and creative. I now recognize the things you can do with odd meters. I never appreciated the value.

What’s on your pedalboard?
I have a Maxon SD-9. I’ve been using a lot of Way Huge stuff; I like the Green Rhino and the Supa Puss. I also have a MXR Phase 45 and a tremolo by Moog that’s one of the coolest pedals ever. I also use an EP-3 Echoplex.