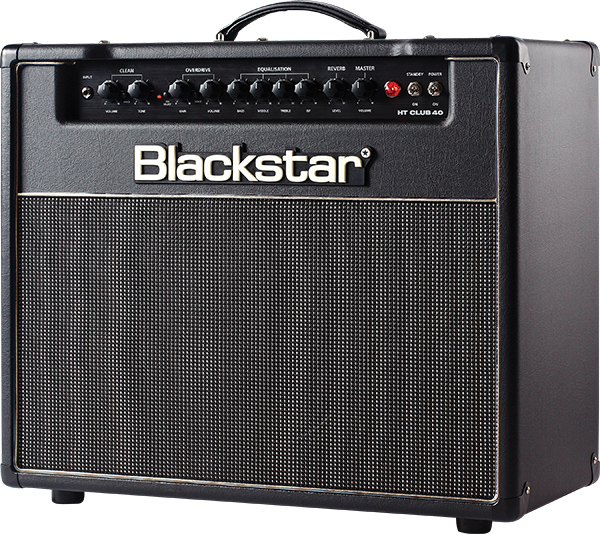 At just over 53 pounds, the Club 40 goes from immaculate cleans to high-gain saturation. Powered by two ECC83 and two EL34 tubes, the amp is housed in a handsome but roadworthy black satin tolex enclosure, and a range of voicings can be coaxed from the switchable modes available on the Clean and Overdrive channels.

The Clean channel offers “Boutique” and “Modern” modes that are accessed via the Voice button. With its dedicated Tone knob, this channel provides Class A sounds found in the “Boutique” mode, and Class A/B sounds in the “Modern” setting. The amp’s Reverb knob provides digital reverb, with a button at the rear letting the user choose between Light and Dark settings.

Like the Clean channel, the Overdrive channel features a Voice button to toggle between two modes: classic and modern-sounding overdrives. The Overdrive side has Gain and Volume knobs, and an EQ section with Bass, Middle, Treble, and ISF (Infinite Shape Feature) controls. ISF affects the EQ by blending American and British amp characteristics.

Features at the rear of the Club 40 include a sealed speaker cabinet, FX loop, speaker-emulated output for recording, and powered speaker outputs; 16-ohm for the internal Celestion speaker, one 8-ohm, and two 16-ohm for additional cabs.

On the job, the Club 40 is a modern rock monster. Using a Stratocaster with single-coils and humbuckers, the Clean channel with the Voice button in the “in” position elicits smooth and tight voicings with tons of thick, dirt-free headroom. In the “out” position you have the potential for woolly amp breakup à la a Bassman or British-style amps. This works great for switching between pristine country soloing and filthy chord work.

The Overdrive channel has a dark MESA/Boogie quality, with variations in the midrange alluding to Vox and Orange amplifiers. You can thank the ISF knob for that. Everything from robust grit to ridiculous saturation is available, while the reverb adds unobtrusive wetness and clear shimmer.

The Blackstar HT Club 40 is a lot of fun for the rock or metal guitarist. In short, it unleashes wild artificial harmonics, succulent overtones, and the kind of sustain and punch that makes you want to play guitar for hours.