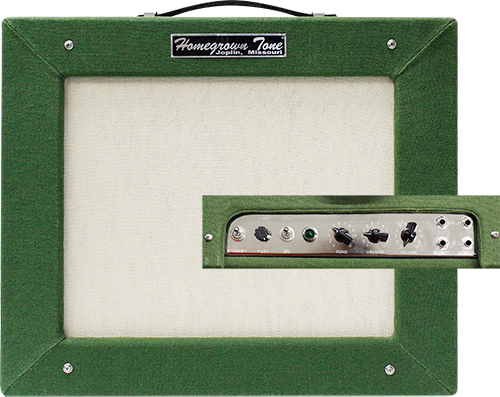 Can’t get enough hemp in your life? Then you may need some Homegrown Tone.

These boutique amps are built by the partnership of Kenji Numata and Dale Campbell in their Missouri workshop (which, no, is not a “legal” state, but no laws are broken in the building of these amps – maybe.)

Homegrown Tone amps are housed in all-hemp cabinets covered by hemp canvas and grillecloth with the sound coming through a hemp-cone speaker.

The 420 is based on classic all-tube circuitry and operates just like a tweed Fender 5E3 Deluxe. It’s a simple setup with minimal fussiness. It sports switches for On/Off and Standby, and has four input jacks with two Volume knobs and channels that are interactive with minimal control via the single Tone knob (Homegrown also offers a split-channel version). The cab is larger than a tweed Deluxe, housing a single Tone Tubby 40/40 12″ speaker.

And that’s it. From there, the magic is in your hands.

We tried the 420 with a trio of guitars that sound great through an original 5E3; a ’56 Stratocaster, a ’52 P-90-equipped Gibson ES-5, and a recent Gretsch 6120 reissue with DeArmond DynaSonic replicas.

The 420 can be quite dark-toned, kind of like a vintage four- or six-input Vox AC30 from the days before Top Boost. Plugging into the Normal channel with the Tone set to 5 and playing through neck pickups, the amp provided a juicy rhythm sound, but certainly not a jangly, bright tone. The tone was smoky, even cloudy.

Switch to the Bright channel and twist the Tone dial all the way to 10 with the guitars on their most trebly settings, and the 420’s tone comes alive with a resonant sound. Its note-definition was superb for single-string and even double-stop solos. Strummed chords were chime-like. For blues, honky-tonk, rockabilly, or classic ’50s rock and roll, the sound is indeed very tweed Deluxe.

Our one concern was the hemp canvas. It just doen’t feel substantial enough to survive being toted around to clubs and loaded in and out of vans. The builders report that the cabinet itself is lacquered to prevent moisture from damaging the hemp board. The 420 we tested had a Scotchgard coating on the fabric, but Numata and Campbell are experimenting with other top-coat finishes.

All Homegrown Tone amps are hand-built to order, so options are a request away.