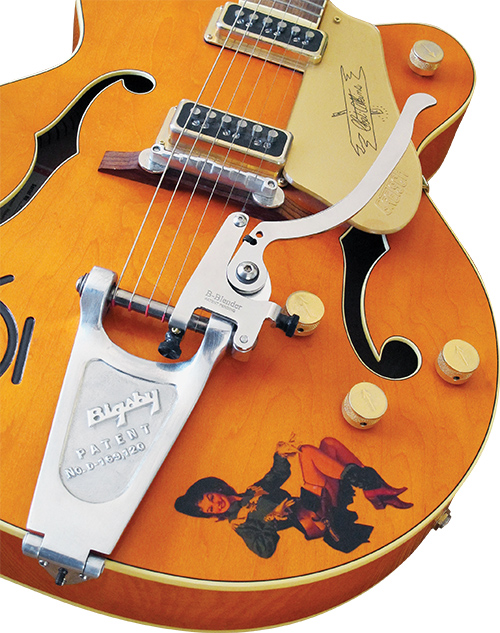 Why aren’t we guitarists ever happy to have our guitars sound like guitars? We wanted to emulate a trumpet’s blare, so we invented the wah pedal. We had to have an organ’s warbling vibrato, so we cobbled together bizarre tremolo effects and rotating-speaker systems. And we wanted a pedal steel guitar’s weeping moan, so in 1967 Gene Parsons and Clarence White of The Byrds gouged and drilled out a Tele and bolted it back together as a Rube Goldberg-like contraption that they christened the “B-bender.”

There’s been many a variation on that complex creation. Paul Bigsby developed a mechanical, cable-controlled B-bender with a foot actuator, as well as his simpler Palm Pedal. Then there are adapted Scruggs banjo tuners and other detuners, Hipshots, various double-benders, and more clones, copycats, and contrivances.

Seems we can’t bend those strings far or wide or high or often enough.

Enter Jim Alday. His new B-Blender adds B- or G-string-bending capabilities to most any Bigsby tailpiece, while still allowing you to use the full vibrato effect. Talk about having your cake and still keeping your svelte waistline too.

Alday is a retired engineer from Remington Arms, Xerox, and Bausch + Lomb – all important credentials that explain the quality of his creation. He’s also an amateur guitarist who, like a couple million others, fell in love with picking after hearing Chet Atkins in the ’50s. Alday says he’s been playing the same songs for 40 years now and that his wife hates them both, so he decided to add some tricks to his bag.

Enamored with the Bigsby vibrato, he sought a way to add a B-bender effect to the tailpiece. In classic hero-overcomes-all-odds style, everyone said it couldn’t be done. So he did it. The result is a beautiful piece of kit. Especially considering how little it costs.

Alday’s invention fits onto any type of Bigsby, from a B5 to a B6 and on. (The kit also includes an adaptor for imported Bigsbys like the B50 and B60.) The unit replaces just the original handle and requires no machining, adaptions, or gouging with a wood chisel. Simply attach the E, A, D, G, and E strings to the original Bigsby shaft, then run the B string through the adaptor. Tighten a set screw at the rear to set the lateral position of the handle, then another setscrew at the side to fine-tune the side-to-side pull of the handle up to a C#. Yes, it’s that simple.

With the B-Blender in place, you can move the handle up or down for full six-string vibrato, move it laterally for the B-bender effect, or do both simultaneously to create a pretty wacked-out sound.

But that’s not all. Alday’s setup comes with an adaptor plate that changes it to a G-Blender, lifting your G string to G# or A (no, it’s not set up to let you do both B and G strings, either together or separately).

Now get this; Alday makes all the stainless-steel components by hand and has the aluminum handle bracket CNC-machined by a local shop here in the U.S. of A. The precision and beauty are astounding. As Alday jokes, the quality is so good, the B-Blender will probably outlast your guitar.

We added the B-Blender to a reissue 1955 Gretsch 6120 with the idea of making it an ideal country and rockabilly machine. The sleek styling wasn’t quite right for the Gretsch’s vintage chic, but the sound sure was. Leon McAuliffe, eat your heart out.

With a typical .012-diameter B string, the lateral force required for the bender is less than one pound. The motion is easy to pick up, although practice is necessary to add the bends slickly, mid-phrase. This is one place – perhaps the only place – where a Parsons-White B-bender might have it over Alday’s creation, as pulling down on a strap-button actuator doesn’t require a third hand. Then again, we also didn’t have to gut the Gretsch to set it up.

If you ever dreamed of being Speedy West, Jim Alday’s B-Blender probably won’t quite get you there. But the simplicity, cost, quality, and sound will have you throwing in Drifting Cowboys – or even Hellecaster – licks with a near-magical sleight of hand.