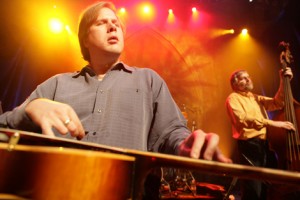 Famous as a driving, fiery blues guitar virtuoso in the ’90s, the late Jeff Healey’s passion for that music was equaled (at least) by his passion for older blues, vintage swing, and jazz going back to the ’20s. This came through in his record collection of 30,000 78s.

Over time, Healey began performing that music mode onstage with his band the Jazz Wizards, recording a DVD and four albums for Stony Plain Records. This 12-song compilation, taken from those albums, offers a compact survey of Healey in classic jazz vocals-guitar-trumpet mode.

The songs, not surprisingly, are standards, infused with a vibrant liveliness that never sounds antiquarian. Healey’s staggering command of old-school jazz guitar in the style of Eddie Lang, Django Reinhardt, and George Barnes comes through on his aggressive acoustic take on the Lang-Joe Venuti duet “The Wild Cat,” violinist Drew Jurecka taking Venuti’s part. 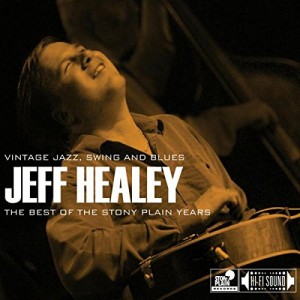 The same applies to “Guitar Duet Stomp,” a Lang-Lonnie Johnson duet and a Django-style break on “Some Of These Days.” His amplified breaks on “Sing You Sinners” and “I Would Do Anything For You” conjure up Barnes at his liveliest.

For those new to the jazz end of Healey’s artistry, this sampler provides ample reason to track down those earlier albums.