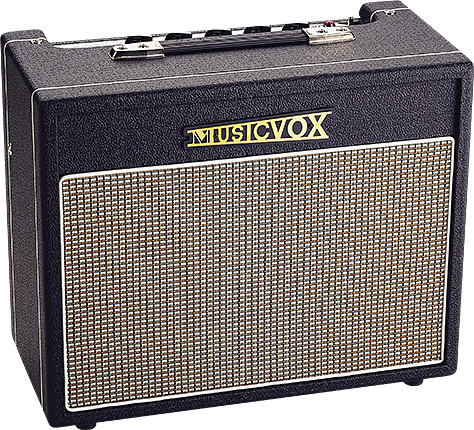 For nearly two decades, Musicvox’s designs have captivated players and fans, appearing in Austin Powers and in the hands of serious players and bands like Keith Urban, Allen Woody, Polyphonic Spree, and Redd Kross. The company’s latest super-retro entries are the limited-edition Space Cadet guitar and the MVX-15 Studio Custom amp.

The Space Cadet is a solid piece of luthiery. Its 25.5″-scale bolt-on maple neck features a 22-fret rosewood fingerboard with block pearloid inlays. Hardware includes two special-design humbuckers (P-90s are also available), master Volume and Tone knobs, a three-way switch, and chrome tune-o-matic bridge and tailpiece. The tuners and full string tree (to increase the string angle over the nut for better intonation) are also chrome. The finish on the triple-bound mahogany body is pretty swank – deep blue with a white wedge and white neck. The wedge theme is repeated on the headstock for an overall art deco effect.

In our first test run, the Space Cadet delivered a lot of muscle and precision. The fast neck featured a beefy, but easy-to-grab profile, and the guitar came with an excellent setup, allowing us to rip up and down the fingerboard to at least the 20th fret. The frets, for their part, were excellent, while the body weight was somewhere between a Les Paul and a Strat and hung comfortably on a strap. Plugged into a variety of amps, the Space Cadet proved a workhorse, covering the rock/blues/country spectrum. And don’t be fooled by the vintage, Gretsch-styled covers on the humbuckers – these pickups can play crunchy rock and metal just as well as blues or retro rock and roll.

The new Musicvox MVX-15 amp, meanwhile, packs some cool features of its own. Sporting a Class A, all-tube design, the MVX-15 exudes an old-school Vox vibe in either blue or black tolex. Two EL84 power tubes produce a very loud 15 watts of power, while a pair of 12AX7 preamp tubes shape the tone. The cabinet contains a 10″ Eminence or Celestion speaker (our tester had the latter). The control panel has a pair of inputs, on/off switch, plus Volume, Tone, Reverb knobs, as well as Speed and Intensity controls for the tremolo circuit.

Being Class A, the MVX-15 is a crank-it amplifier – the more gain you give it, the more ballsy overdrive it delivers. Conversely, to clean it up, back off the volume on amp or guitar or simply pick softer. With the Space Cadet plugged into it, the spring reverb was silky and clean, and the tremolo added to the fun factor, from slow for a Robin Trower-like modulation to moderate levels for ’60s surf sounds. Crank it up all the way to produce an extreme effect for modern rock or syncing with the rhythm section.

In terms of overdrive capability, the amp’s overall gain depends on the guitar and its pickups. The Space Cadet’s humbuckers are on the hot side, pumping up the drive to AC/DC, Black Crowes, and Aerosmith levels, while a Les Paul with lower-output humbuckers yield sweet, smoky blues tones and more British Invasion sounds. A favorite overdrive and distortion pedal in front of the preamp (between the guitar and the amp’s input) provides as much silky, hard-rock crunch as you want. We further tested the MVX-15 with a very transparent (lower output) overdrive pedal and the results were spectacular, bringing in powerhouse chords with clear definition like Angus Young, as well as leads with tons of sustain, like Slash.

Musicvox threads the needle between vintage cool and modern playability, turning out gear that looks right and sounds on the money. Overall, it’s tough not to be impressed with this twosome; the Space Cadet has killer looks, playability, and tone, while the MVX-15 rocks the house. Plus the amplifier is highly portable – another feather in its tubular hat.

Blues Guitars On A Budget