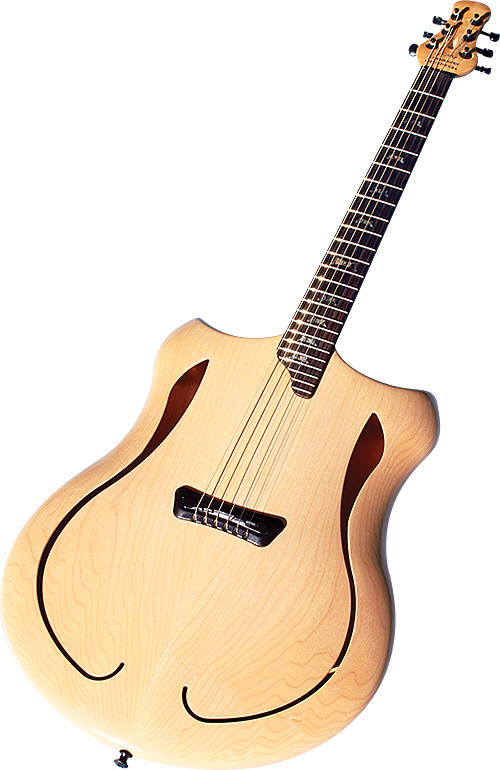 Anyone who has ever plugged an acoustic guitar into an amp or PA is well-acquainted with the bone-crushing howl of hollowbody feedback. It’s not a happy sound. And in a live setting, it can be almost impossible to dial in enough volume to sit in the mix without inducing that telltale low-frequency wail that precedes the inevitable chorus of “Turn that thing down!” Unfortunately, many acoustic players resort to electrics live, even if the resulting tone doesn’t suit the song.

Methods used to combat hollowbody feedback are legendary: tape over sound holes, posts between top and back plates, all sorts of things stuffed into bodies. Inevitably, the resulting sound has little resemblance to the rich acoustic overtones the player was trying to preserve in the first place. Now, luthier Jon Kammerer has what may very well be the answer to acoustic guitar players’ prayers: a guitar that looks, plays, and sounds like an acoustic but does not feedback, even under the most unforgiving of circumstances.

Kammerer took a scientific approach to the problem by first identifying the frequencies most responsible for feedback and then devising a revolutionary design to keep them at bay. The result is the Pegasus, a hybrid acoustic guitar with a top plate that nearly “floats” above the body. Kammerer recognized that an acoustic guitar projects sounds because it acts like a blacksmith’s bellows, pumping air through the sound holes. The unplugged answer to more volume has always been to make a bigger bellows by building larger bodies – precisely the prescription for low-frequency feedback loops when the guitar’s sound is amplified back at it through a speaker. So, Kammerer extended the length of the sound holes as far as possible to limit the vibrating top plate from transferring energy to the sides and back, thereby preserving the mid- and high-frequency overtones but stopping the feedback-causing low frequencies from being acoustically amplified. The result is an identifiably acoustic-looking and -sounding guitar with very little tendency to feedback when amplified.

The Pegasus body is made from two pieces of solid maple, shaped to pleasing contours, hollowed out with CNC machinery, internally braced, and glued together as top and bottom to form a shell. The top is only about 0.125″ thick (it’s an incredibly light guitar), and the neck is made of figured maple with an inlaid ebony fretboard (rosewood, maple, and Pao Ferro are also options). Kammerer uses a 25″ scale with either a conventional or compound radius as options. The 24-fret neck is bolted on, but the plate and screws are hidden behind a walnut plate, and all frets are reachable and playable. The fretwork is impeccable, as you would expect from a maker who has taken such care in design and material selection.

The guitar sits in the lap like a well-balanced dreadnaught but is thinner and more comfortable to play than most acoustic guitars when standing up with a strap. And that is precisely the point – this guitar is made to be plugged in and played through the L. R. Baggs active-element pickup system beneath its saddle. Unamplified, it isn’t much louder than an unplugged Epiphone Casino, so if you’re looking for a guitar to do double-duty, the Pegasus probably isn’t the answer. Plugged into an amp or PA, however, it sounds more “acoustic” than any other acoustic/electric it was compared to, albeit a bit brighter due to the maple body (the Pegasus can also be ordered with a warmer-sounding walnut body). That brightness did translate into more fingers-on-the-strings sound than we normally would expect, but try as we might, we couldn’t get the Pegasus to feed back any more than a solidbody guitar, and certainly less than the Casino and a White Falcon we paired with it.

What a luxury to finally fingerpick and strum at performance-level volumes without fear of suddenly delivering a “howler.”