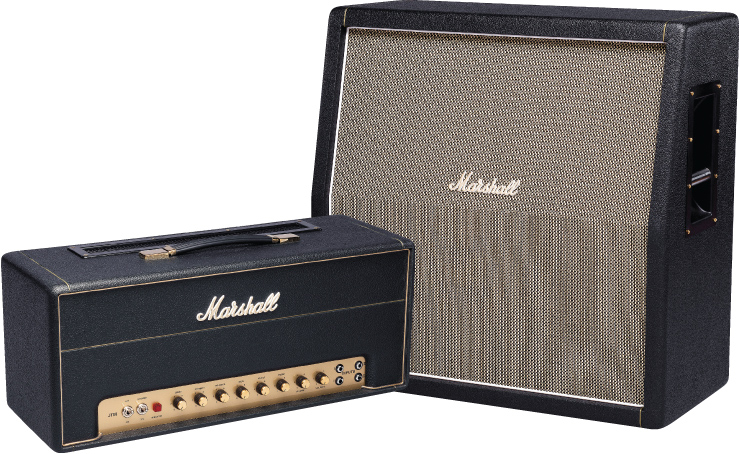 Marshall Amplification needs no introduction. The company’s iconic heads and 4×12 cabs have been blowing out eardrums since the mid-1960s. At the turn of the century, Marshall began reviving the tagboard construction of their glorious past with the Handwired Series. The latest of their “true” reissues is the 2245THW that’s based on the JTM45 head with tremolo and just happens to be identical to the circuit of the much-ballyhooed 1962HW “Bluesbreaker” combo.

The 30-watt 2245THW is powered by two KT66 valves with the preamp utilizing four 12AX7s. Rectification is handled by a GZ34 tube. Besides its old-school construction, the amp features Drake transformers that are as close to vintage as modern safety standards allow. Each channel, normal and trem, has its own Volume control and shares the EQ section, which consists of Treble, Middle, Bass, and Presence controls. Last but not least on the knob front are the tremolo Speed and Intensity, along with four inputs that allow for normal or padded inputs for both channels. The amp’s back panel features a single speaker output, an impedance selector (8/16 ohms), a mains selector (100/120/230 volts), and a jack to connect the supplied on/off footswitch for the tremolo.

The 2245THW was tested with a 1967 Telecaster and 1959 reissue Les Paul through Marshall’s 1960 AHW cabinet. This large 4×12 cab, with its basket-weave grille, contains hand-wired Celestion G12H30s that are both period-correct (and happen to be one of the finest replacement speakers around). Plugged into the normal channel and with everything turned up to 10 to see what the 2245THW was capable of, it became apparent that, despite its diminutive 30-watt rating, this amp can certainly rattle windows, get your ears ringing, and presumably keep up with your loud drummer. Even with everything pegged at 10, the bass lowered, and the Presence knob set to taste, it was quite simple to dial in that hard-nosed bright-but-full Marshall tone via the normal input. If desired, though, the well-voiced EQ can be made warmer and less obtrusive.

Turning to the tremolo section, we were met with a much darker tone than normal, even with the shared tone controls set quite bright. The tremolo effect, though not usually associated with the Marshall sound, was a welcome addition for either clean or distorted settings, offering a wide variance of speeds and an intensity that could be set for anything from subtle to pulsating. When performing the time-honored bridging of inputs, the darker trem input could be mixed in to soften the inherent attack and brightness of the normal input, but as with the 2245’s vintage forefathers, the patch cable could be dropped and the volume of the unused channel simply raised for a more subtle version of the bridging effect. The unused channel can also be turned up all the way for more dirt.

Of course, the 2245THW took pedals well. It was particularly fun to run a dirty boost pedal in front of it for gritty tones at a lower volume level. As well as the pedals worked, though, the favorite setup was Les Paul, cord, and amp on 10, using the guitar’s Volume and Tone knobs to summon everything from bright to dark shades and the entire spectrum of clean to hard-edged dirty tones.

At close to 82 pounds for the cab and 33 for the head, moving this rig may require assistance, but what it offers in tone and visceral presence well exceeds the burden of its physical weight. The 2245THW is another fine high-end piece in the Handwired Series, offering Marshall’s classic intimidating’60s style, along with its classic muscular and gritty plexi tone.