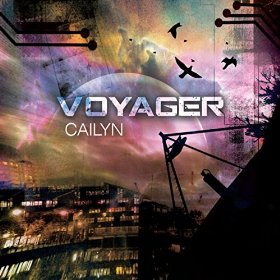 Cailyn Lloyd’s former life as a blues rocker of the Peter Green school gave her the stuff to put blood into the New Age music she has been making for the last few years. Her latest uses British composer Gustav Holst’s orchestral suite, “The Planets,” as a jumping off point.

The consistently full-bodied tone of Lloyd’s PRS guitar and her blues and blues-rock background gives a welcome earthiness to even her most celestial cuts. She sets the stage with the original title tune, and the song’s fullness and depth are in contrast to the light, airy feel of so much space-inspired music.

Gritty and substantive, Lloyd does a fine job of covering the four Holst tunes too. With a special nod toward “Jupiter,” she creates space in a way that is different from yet still somehow brings Edgar Winter at his best to mind.

It isn’t often that guitar, synthesizer, and traditional keyboard synch so well. And it’s not often the appeal of this type of music can go so far afield and still stay true to its own standards.