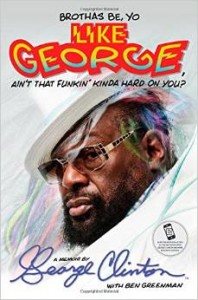 Let’s get it out of the way. That title… one of the best in recent memory. Then again, what else should we expect from the man who arrived in the Mothership to bestow on the world funk albums with titles like Gloryhallastoopid (Or Pin The Tale On The Funky)?

Beyond the dustjacket, Funkateers are treated to a treasure trove of recollections and insights, from Clinton’s earliest doo-wop days in Plainfield, New Jersey, through the entire evolution of his P-Funk collective.

Clinton (with co-writer Ben Greenman) goes light on his formative years, but interested fans and nonfans alike will find enough hairy tales of druggin’ and music-biz shenanigans to keep the narrative motoring even when the authors at times get bogged down in an album-by-album organization. For readers in both camps, Clinton’s untangling of the P-Funk family tree is worth the price of admission alone, as are the stories behind his associations with Bootsy Collins, Bernie Worrell, and Sly Stone.