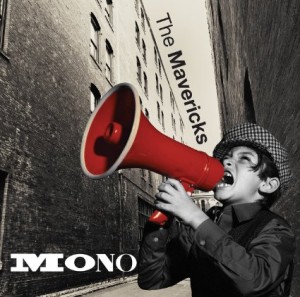 After their acclaimed 2014 comeback album In Time and a successful tour, the Mavericks wasted no time creating a followup effort continuing the eclectic sounds, original material, and powerful performances that began in ’91 with their self-released first album. Singer-songwriter Raul Malo, who recorded a number of admired solo efforts after the group disbanded, wrote all but one song here, using co-writers on a few numbers. The flawless dynamics of the band – including guitarist Eddie Perez, drummer Paul Deakin, and keyboardist Jerry Dale McFadden – remain in sync with the songs and Malo’s emotional, explosive vocals (he also does some of the guitar work).

Augmented by horns and accordion, they explode on the mambo-driven “All Night Long.” Keyboards and horns drive the lighthearted “Summertime (When I’m With You).” The Roy Orbison influence on Malo’s vocals emerges on “Pardon Me,” a ballad about vulnerability, with a simple, eloquent break from Perez in the middle.

Malo’s material continues to explore themes from optimistic love songs to anguished ballads and wry and philosophical humor, the latter reflected on the sing-along anthem “Waiting For The World To End.” The love song “Fascinate Me” goes a more delicate, ethereal direction. Driven almost completely by keyboards, Malo ably carries the song’s minimalist lyrics. His songs, whatever mood he’s conveying, manage to project both simplicity and eloquence without falling into pretentiousness.

Perez’s contributions vary from prominent to subtle. On “What You Do To Me,” he unleashes two slashing breaks. His flawless rhythm licks provide the heartbeat of the very retro “Without You” and “Stories We Could Tell,” an expansive boogie-woogie number sitting somewhere between late ’50s Elvis and Louis Prima. He’s all over the album’s sole non-original – the 1973 Doug Sahm composition “Nitty Gritty” – as McFadden adds combo-organ backing that serves as homage to Sahm’s longtime keyboard partner, Augie Meyers.

“Do You Want Me To” reflects the guitarist adding both blazing blues licks and dueling with Max Abrams’ delightfully greasy sax.

Few bands that dissolve manage to regroup and wax triumphant again, especially a unit that defied trends as much as the Mavericks did the first time out. With a sound as distinctive as John Fogerty or even Steely Dan, they managed to not only reconstitute themselves, but retain their visionary musical integrity. On Mono, they’ve caught lightning in a bottle yet again.