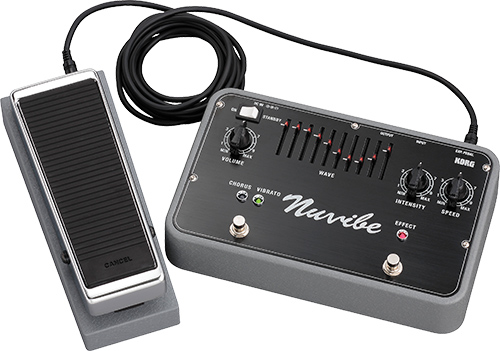 Korg is not known as a guitar company, but to their great credit they worked with Fumio Mieda – developer of the original Uni-Vibe from 1968 – to resurrect his classic modulation effect as the Nuvibe.

A late-’60s Uni-Vibe is like the snow leopard of guitar effects; seldom seen and awesome to behold. But Mieda could not simply re-create the Uni-Vibe from 40-year-old schematics because the photocells central to the circuitry contained cadmium, which is toxic and no longer available. (Plus, it turns out the original schematics were inaccurate.) So he wondered: How close should a copy be to the original – and should it also emulate the original’s shortcomings?

Tone was the top priority, and the Chorus and Vibrato effects on the Nuvibe are deeply satisfying and genuine. The Chorus is not like a modern chorus pedal, but rather a chewy, phased effect. This is the sound for which the Uni-Vibe is revered, and it’s achieved in the circuit by mixing the subtler Vibrato effect with a dry signal. Chicken-head dials control the intensity of the active effect (chosen by footswitch) and the speed of the modulation. The Expression pedal, which is included, enables speed control by foot and overrides the Speed knob. A third dial for volume adjusts the output, which is at unity when set to Max.

A major departure from the Uni-Vibe is the Nuvibe’s addition of 10 sliders for shaping the LFO waveform. White markers denote positions for the original LFO, and users now have the freedom to adjust the oscillation. Red LEDs on the faders provide a real-time visual of the wave, which is very helpful when adjusting to remove an audible pop or peak. Also, it looks way cool.

Purists will appreciate the Nuvibe’s gorgeous tone. Given the vintage dimensions (10.24×6.69×2.64″, plus full-sized foot pedal), they’ll have to really want it, too. At a time when stompboxes are becoming small enough to be choking hazards, the Nuvibe’s ginormous footprint is an obstacle.

Players will have to judge the Nuvibe’s size and features according to their own needs. Do you require adjustable LFO or a pedal to control speed? Would you shell out for an excellent repro to complement your vintage rig? On balance, players who dig a vibey swirl have some very nice options available at one-third the size and less than half the price. But guitarists who are just nuts for the complete vintage vibe will be in Hendrixy heaven.