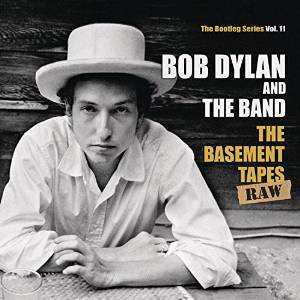 Fans file it under Bob 101. Hunkered in the Catskills in 1967 after reportedly cracking up his Triumph motorcycle a year earlier, Dylan invited the rockabilly musicians who backed him on his divisive ’65-’66 tour to record some demos at his home. Many of the resulting recordings circulated unofficially for years. Meantime, said backing musicians went on to acclaim as The Band. In 1975, they spit-shine 16 of the ’67 tracks, add eight of their own, and voilà: The Basement Tapes.

Available in two packages, “Complete” and “Raw,” The Bootleg Series Vol. 11 was produced with help from The Band’s Garth Hudson, who recorded the originals, and definitively answers a question that has dogged Dylanologists for decades: What was on the rest of those demos, recorded when Dylan was revisiting country, soul, and way old American music just as rock was suffering the taint of psychedelia? In his liners, Sid Griffin even claims The Basement Tapes are the blueprint for alt-country (a claim that ignores Doug Sahm, Gene Clark, and others, but never mind).

Both packages feature scads of unreleased material. In fact, the 138-track “Complete” purports to present the sessions in near entirety and chronological order, as well as Hudson’s pre-1975 stereo mix nixed in ’75. The econo “Raw” serves 38 cuts, and both restore the Dylan songs from the ’75 release to their “unadulterated” form, or at least remove the 1975 overdubs.

A Dylan classic the way it should have been done.