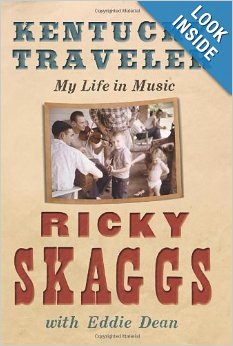 Born in rural Kentucky in 1954, Ricky Skaggs (named for “I Love Lucy’s” Ricky Ricardo) stands today as a supremely versatile musician. With his band Kentucky Thunder and his own record label, he focuses on the traditional bluegrass that nurtured him from boyhood on. That journey, from bluegrass child prodigy to admired young sideman to ’80s mainstream country star, balanced by the ups and occasional downs of his personal life, makes for interesting reading.

Among memories of various Nashville stars, his recollections of the pillars of bluegrass particularly stand out. A friend of Bill Monroe, Flatt and Scruggs, his former boss Ralph Stanley and one-time Stanley bandmate Keith Whitley, he captures their human and their lighter sides.

His memories of fine instruments like his first Gibson mandolin and a 1924 F-5 Loar he took out a bank loan to purchase are especially enjoyable.

Reflecting on the excitement of discovering Django Reinhardt, Skaggs recalls marveling at his music’s similarities to bluegrass. Any musician can relate to his ’80s dilemma of lacking a lead guitarist for one tour and having to get his own guitar chops up to speed. Too often, such memoirs give the music short shrift. Not this time.