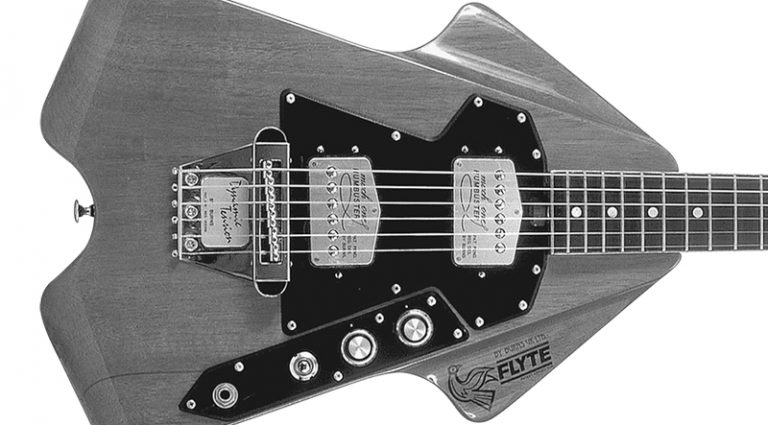 If the United Kingdom had a Leo Fender, it was probably James O. Burns. England’s most famous and prolific guitarmaker, his legacy is reflected in guitars still being produced.

Burns is most famous for the guitars he created before selling his business to Baldwin Piano and Organ Co. in 1965, including the Bison, Hank Marvin, and Jazz Split Sound (with the Wild Dog setting). But his career continued, off and on, until his death in 1998, and along the way he left a number of curious instruments, including this stealth-shaped ca. 1976 Burns Flyte.

But it wasn’t stealth aircraft that inspired the Burns Flyte, rather it was the supersonic transport (SST) – the “Concorde.” The Concorde was conceived in ’62 and begun as a joint project of the U.K. and French governments. The maiden voyages of the first Rolls Royce-powered prototypes occurred in 1969, and in January ’76 the first commercial flights commenced, to great media fanfare (and environmentalist protest due to its extreme volume). Indeed, the Flyte was originally to be called the Conchorde, although it’s not known if any were ever produced under this name.

The Flyte was Burns’ first design under his own name after he sold the business to Baldwin. In between, he worked for Dallas Arbiter, which produced his Hayman line of guitars in the early ’70s.

Following the demise of that company, in ’73 Burns hooked up with an outfit in Newcastle and began to work on guitars to be sold with the brand name “Burns UK Ltd.” There, the Conchorde/Flyte was developed and introduced in ’74. Basically, the guitars were made by Shergold and the electronics by Re-An.

Coming at the height of the “copy era,” the Burns Flyte was a pretty radical design for 1974. Its symmetrical, bi-level, swept-wing body styling and sharply pointed head were truly supersonic. The body was mahogany, the bolt-on neck maple. At least some of the fingerboards were, oddly enough, ebonized maple. The Flyte was outfitted with twin Mach One Humbuster humbuckers with unusual five-sided metal covers.

Building on some of Burns’ ’60s ideas, the Flyte had a Dynamic Tension bridge assembly with individually height adjustable saddles on a bridge plate. These came in several shades of silver, white, natural, and even with Union Jack graphics.

Unfortunately, except for the novel cosmetics, the Flyte is – like most of Burns’ ’70s products – somewhat soulless.

The Burns Flyte is unquestionably cool, however, its reception was too, even less successful than that of the airplane that inspired it. T-Rex’s Marc Bolan played one, as did those perennial pranksters, Slade, but that’s about as far as it got.

Burns UK introduced a few other models, including 1976’s Artist and Mirage, and ’77’s LJ24, but Burns’ old nemesis, the need to manage his company, brought down Burns UK, and the Flyte, in 1977.

It’s not known how many were made, but unlike the SST, which still soars, the Burns Flyte, a.k.a. “Conchorde,” is now stashed in a hangar that houses so many curious-but-failed guitar designs.

This article originally appeared in VG’s February 2003 issue. All copyrights are by the author and Vintage Guitar magazine. Unauthorized replication or use is strictly prohibited.

A Guide to Vintage Dobros