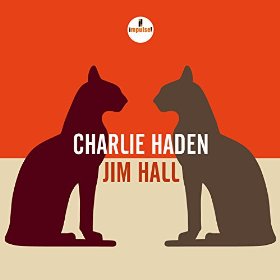 In the past year, the jazz world lost two giants in guitarist Jim Hall and bassist Charlie Haden. All the more reason to celebrate this previously unreleased recording of the pair performing as a duo at the 1990 Montreal Jazz Festival.

Haden and Hall have more in common than first glance might show. Both are melodic masters who can get outside with the best of them – literally. When Ornette Coleman pushed jazz boundaries into the avant garde, Haden was onboard. Hall was a member of the groundbreaking Chico Hamilton Quintet and Jimmy Giuffre 3. But the duo setting was more than a flirtation for both – Haden pairing with Coleman, Keith Jarrett, Alice Coltrane, and others; Hall with Bill Evans, George Shearing, and Ron Carter; each with Pat Metheny.

With the shortest tune clocking in at 7:05 and longest at 12:04, there’s plenty of exploring different avenues of interplay. But the further they stretch out and push the envelope, the more they hold the listener’s attention, rather than leaving him or her behind and bewildered.

Hall’s blues chops step to the fore on Coleman’s atypical blues, “Turnaround,” which features a stunning unaccompanied section by Haden. Each contributes two originals, peppering a repertoire that ranges from Hoagy Carmichael to Thelonious Monk.