Kay entered the electric bass market in the mid 1950s with the K162, which later morphed into the similar K5965 (VG, March 2011), and while each met with a modicum of success, in 1960, the Chicago-based instrument maker introduced two near-polar-opposite four-strings.

The epitome of the aesthetic excess for which Kay’s electric basses became known, the K5970 Jazz Special made its debut sporting a slightly asymmetrical double-cutaway body. Priced in the 1960 catalog at $195, it was offered in two finishes – Jet Black and Natural Blond – and billed as “our finest model.” It had, the catalog said, “Beautiful select curly maple body, hard ‘rock’ maple neck, genuine rosewood fingerboard. Beautifully hand-rubbed and polished to a rich deep luster.” Like the 5965, the body was bound front and rear, and the large K on its headstock led to it being referred to as the “Kelvinator,” given its semblance to kitchen-appliance logos of the era. Not surprisingly, vintage enthusiasts call it the “keystone” headstock. The fingerboard had 20 frets, no fretboard markers, and joined the body at the 15th fret.

The pickup, bridge, and tailpiece were the same as on the 5965, though the pickup was angled. There was also an oddly shaped pickguard on which the Volume and Tone controls were positioned – arguably, too close to each other.

History doesn’t chronicle any famous player endorsing – or even consistently playing – the Jazz Special, but like other weird instruments of the time, its oddness makes it collectible.

Part of Kay’s Value Leader series, the K5961, which listed in the 1960 catalog at $79.95, was simply a guitar with bass parts; its scale was guitar-length (a propensity not exclusive to Kay in the early ’60s), its neck bolted to the body, and its maple fretboard adorned with red tortoiseshell markers. The bridge was also maple. Initially, its headstock logo had a ’50s-style script inside an oval, but the ’61 edition had a tin logo with the “Kelvinator” K (as seen here). The pickguard was a textured aluminum parallelogram on which were mounted the small Volume and Tone knobs, and the top-mounted pickup wasn’t particularly inspiring, sonically or visually.

A six-string Value Leader bass guitar, the K5962, was touted (listing for $84.95) in the ’60 catalog, but not shown. However, in the ’61 catalog, the six-string was not only displayed, but had a price that had been lowered by $5 to match the K5961. The catalogs with the Value Leader showed a maple fretboard and tortoiseshell markers (as opposed to the example shown here, with rosewood). Furthermore, many Kay instruments had double-dot inlays on frets other than the (usual) 12th fret, as found on this 5961. 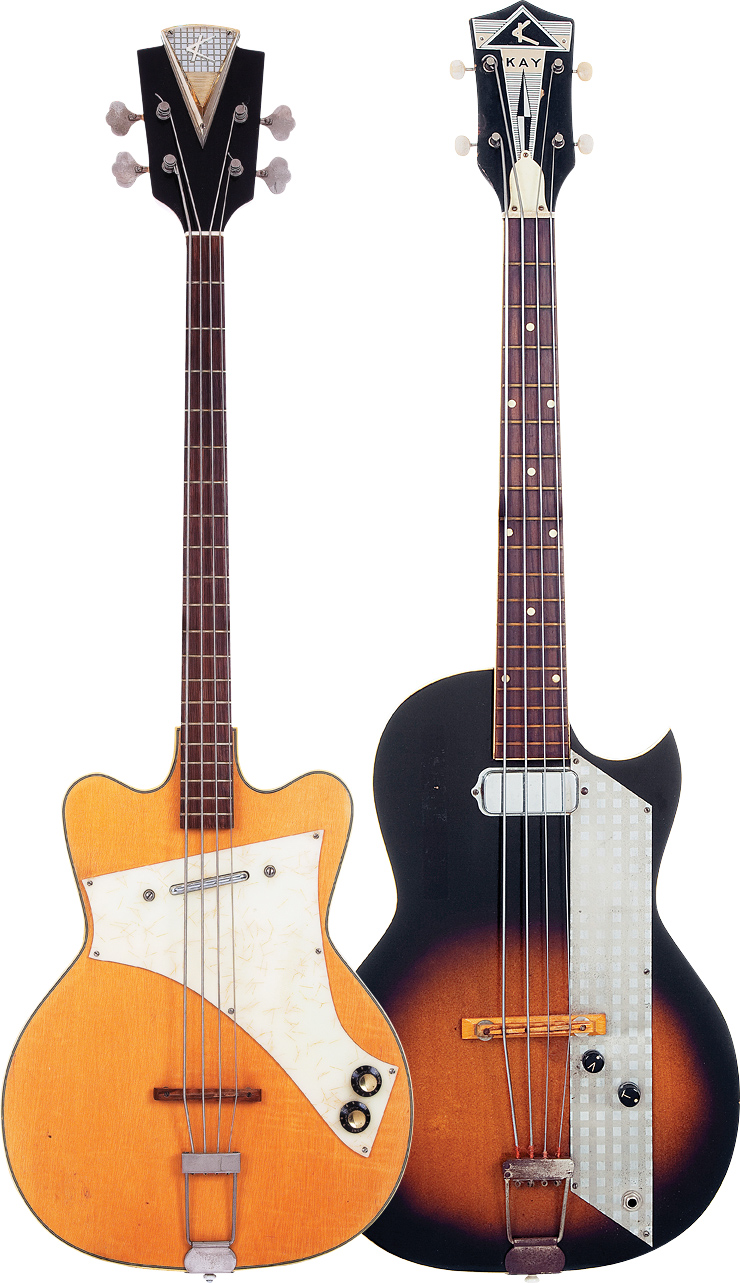 The Jazz Special, the hollowbody/guitar-scale Value Leader, and the 5965 were all gone from Kay’s lineup by ’64. The “Value Leader” tag reappeared in ’66 on a series of single-pickup solidbody basses with a 307/8″ scale; the series lasted only through ’68.

Kay’s Jazz Special and original Value Leader basses emerged at the dawn of the ’60s “guitar boom,” and exemplify the kitschy, collectible American-made basses of that era.